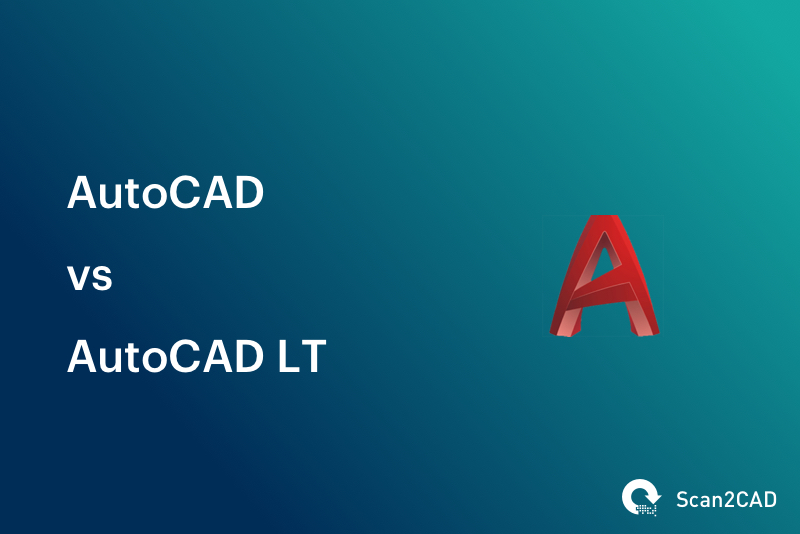 Scan2CAD knows all too well how difficult it can be for CAD enthusiasts and professionals alike to figure out the differences between CAD packages. With conflicting information—or none at all—there’s no real way of finding out what capabilities each program has. It’s for this reason that we set out to create comparison guides for the top CAD programs on the market. This week, we’re turning our heads to look at CAD giant Autodesk and its most popular products.

Since AutoCAD’s inception in 1982, Autodesk has been a large and resounding presence in the CAD industry and beyond. A key player in the evolution of CAD, Autodesk has since released a range of top software packages. None, however, have really been able to surpass the popularity and power of Autodesk’s flagship product, AutoCAD. Offering solutions to a range of industries—from architecture to engineering to entertainment—there’s simply no way of avoiding it. In a measure to broaden its customer base further, Autodesk created a ‘lite’ version in the form of AutoCAD LT.

In this guide, we’ll be examining AutoCAD and AutoCAD LT—looking at the differences in functionality, capability and much more.

As one of the front-running products in the CAD industry, we’d like to think you’re already relatively familiar with Autodesk’s flagship product, AutoCAD. Then again, if you’re anything like us, you’ve probably spent most of your time getting to grips with AutoCAD’s capabilities, rather than its history. Before we get stuck into its incredible features, therefore, we’re going to give you a quick overview—looking at how one of the CAD industry’s favorite products came to be.

Although first released in 1982, AutoCAD was conceived much earlier. It was derived, in fact, from a program called Interact CAD—sometimes referred to as MicroCAD—before it was developed further by Mike Riddle. It was then acquired by Autodesk—a move that proved to cement Autodesk’s reigning status in the CAD industry. The first version was demonstrated at the 1982 Comdex, and was released later that year in December. The release proved to be earth-shattering for the CAD industry, with AutoCAD being one of the first CAD packages on the market to run on PCs. As one of the first CAD programs to be so commercially available to customers worldwide, it’s no surprise that it was such a hit.

With no fewer than 33 versions since its first release, AutoCAD certainly hasn’t rested on its laurels. The latest release, AutoCAD 2019, brought in key updates including a change in the way AutoCAD is packages, the launch of the first AutoCAD web app—joining CAD in the cloud—and the introduction of the handy DWG Compare.

AutoCAD is one of the most flexible software packages available on the CAD market, used by drafters, engineers and architects worldwide. At the time of its inception, it came with only 2D capabilities. As the program evolved, however, it added 3D design and drafting to its long list of capabilities. Although surpassed by programs like SolidWorks, in terms of pure 3D CAD functionality, users can still take advantage of solid, surface and mesh modeling. Available on Windows, Mac and web/mobile apps, AutoCAD facilitates workflows from anywhere in the world. It’s little wonder, then, that its user base is so large.

Although it’s easy to fall into the trap of thinking of AutoCAD as a single program, it should instead be thought of as a software suite. As we’ve said, AutoCAD offers solutions to a broad range of industries across the world. In the past, it did this by offering standalone products, ranging from AutoCAD Architecture to AutoCAD Mechanical. Now, with the release of AutoCAD 2019, AutoCAD is packaged as a single product that offers specialized toolsets.

Its immense popularity also means that its native file format—DWG—is one of the most common and ubiquitous file formats in the entire world. With billions of DWG files in existence nowadays, you’d be hard-pressed to navigate the world of CAD without coming across the file type. Fortunately, Autodesk extended the use of DWG to other CAD software, enabling a wider spread of use across industries. Even if you can’t afford the software—or get AutoCAD for free—you can view DWG files without AutoCAD.

As a software suite with broad and ever-expanding functionality, AutoCAD appeals to a large range of sectors and industries. Whether it’s mechanical engineering, architecture or even graphic design, AutoCAD has a place in businesses across the world—no matter how small or large. It’s for this reason that so many careers nowadays require expertise in AutoCAD.

Typically speaking, most of AutoCAD’s users come from the AEC sector—taking advantage of the many specialized features on offer for architecture, engineering and so on. Let’s take a look at some customer stories…

What is AutoCAD LT?

And now onto AutoCAD’s sister product: AutoCAD LT. Although AutoCAD was met with nothing but commercial success upon its release, Autodesk soon realized that the price alone might be putting offer a broader customer base. With that in mind, they set out to develop an entry-level CAD package that would compete in a much lower price bracket than any of its other products. And that’s how AutoCAD LT was conceived.

Introduced by Autodesk as a lower-cost version of AutoCAD with reduced capabilities, AutoCAD LT was first priced at $495. To put things into perspective, it was one of Autodesk’s first products to be priced below the $1000 mark. And that’s not the only major aspect to note. Unlike AutoCAD, which had to be purchased from official Autodesk dealers, AutoCAD LT was sold directly by Autodesk and in computer stores. Needless to say, this ‘inexpensive’ and ‘lite’ version of AutoCAD was a hit with many.

As with AutoCAD, Autodesk have made an effort in attempting to improve upon AutoCAD LT’s functionality and capabilities. As of 2019, LT moved to a more flexible subscription model, with each release and product update enabling users to take advantage of new features. Additional features from the 2019 release include the new AutoCAD web app, the AutoCAD mobile app and integrated workflows that work smoothly across desktop, web and mobile devices.

The simplest way to explain AutoCAD LT to people not familiar with it is to describe it as a stripped down version of AutoCAD. In short, it is a simplified 2D drafting and documentation program. The main difference between it and its sister product, is that LT lacks the 3D capacity offered by AutoCAD. That’s not to say that AutoCAD LT is a poorer product—it offers the same level of precision offered by AutoCAD.

With AutoCAD LT, users can create 2D drawings and documentation. The program comes with a variety of tools including: 2D geometry, annotation capabilities, dimensions, leaders and tables. Whilst its customization capabilities are nowhere near as extensive as AutoCAD’s, LT still gives users the ability to customize the ribbon and tool palettes. Additionally, users can attach and import data from PDF files, not to mention share and use data from DGN files and Bing maps. Since its first release, LT has continued to add to its list of capabilities, including:

So, how does it differ to AutoCAD?

As we’ve said, AutoCAD LT can only be used for 2D drafting. It lacks the capacity to create or render 3D models. For some engineers and designers, this can be a big deal breaker. If you’re only interested in diagrams, floor plans and other 2D drawings, LT isn’t a bad shout.

The specialized toolsets mentioned in the AutoCAD section—Architecture, Electrical, Mechanical—are only available with AutoCAD. If you’re part of a small business or a CAD enthusiast, this shouldn’t be an issue. If, however, you’re looking to get your hands on toolsets that will help you simplify your workflow, AutoCAD is the only way to go.

Another strength of AutoCAD is that it enables users to customize it entirely to their own preferences. Drafters, designers, mechanical—everyone works differently, and AutoCAD caters to this. LT, however, doesn’t have this capability—it doesn’t support customization with LISP, ARX, .NET or VBA.

One of the biggest selling points of LT is its price. Much cheaper than the full AutoCAD package, many users are willing to overlook its limited capabilities for the lower price tag. While it is cheaper, it does mean separate licenses. AutoCAD is offered on a network license, which means you can run the program on multiple machines. LT, by comparison, requires you to buy a separate license for every machine.

Much like AutoCAD, LT attracts a rather large customer base. Though limited in capability compared to its older sister, LT still has enough functionality to attract many in the AEC sector. Its main customer base, however, lies with smaller businesses and individuals who work primarily with 2D—not looking for the full functionality offered by AutoCAD. After all, as innovative as AutoCAD is, not everyone in the industry is in need of its full toolset.

A big chunk of LT’s customer base also lies with CAD beginners and enthusiasts. For those just starting out with 2D drafting, LT is an inexpensive option with an easy learning curve. If you’re looking for something cheaper than LT, however, you might want to check out our list of top free CAD packages.

By this point, you should be pretty familiar with both programs—from their histories to main features and customer bases. To help you visualize everything more clearly, we’ve put together a table summarizing some of the main differences between the two…

To sum it up, your choice depends entirely on your needs. If 3D modeling is important, there’s absolutely no question—you need AutoCAD. It’s the same kind of answer if you’re a large company looking for a network license. If, on the other hand, you’re content with just 2D drafting—or you’re lured in by a lower price tag—AutoCAD LT isn’t a bad shout.

There’s certainly plenty to consider when making the choice between AutoCAD and AutoCAD LT. If you’re still not entirely sure which is the best option for you, you could always try a free trial of both programs to get some hands-on experience and perspective.

Want to see how AutoCAD compares to other CAD software? Check out our guides to AutoCAD vs SolidWorks, AutoCAD vs DraftSight and AutoCAD vs Vectorworks.

Want to stay updated on all the latest CAD, CAM and CNC news and guides? Keep your eyes peeled on the Scan2CAD blog.