There was once a time when you could count all existing CAD applications on one hand. Back then, selecting a CAD package was only a matter of opinion A or option B; but that was a very long time ago. Today, there are hundreds of CAD applications that have a wide range of capabilities. The problem is no longer how to get a CAD application, but which one to get. It is in an effort to solve this problem and help you make informed decisions that Scan2CAD regularly creates easy-to-understand CAD software comparison articles of the different CAD software packages available today.

In this article, we will be comparing two applications that need no introduction; AutoCAD and SketchUp. When compared with many other CAD applications, these two easily stand out in terms of capability. However, when pitted against each other, which of them is best suited to turn your ideas into reality? This article will answer the question by first exploring their history, capabilities, and users. Next, we will comparatively analyze their features, licensing options, capabilities, and compatibility with different operating systems.

AutoCAD, the CAD software package which we have come to know and love today started out in the late 1970s as Interact CAD, also known as MicroCAD. In 1982, Autodesk, the parent company of AutoCAD was founded by Michael Riddle. The first version of AutoCAD which was developed by Michael and 15 other co-founders was released that same year as the company’s flagship product.

It is safe to say that the release of AutoCAD completely revolutionized the CAD industry. For starters, it was one of the first CAD applications to be developed for PCs, thereby making it accessible to a multitude of designers. Prior to the launch of AutoCAD, commercial CAD applications only ran on minicomputers or mainframe computers. Designers who didn’t have access to these had to use the traditional, error-prone t-square and drafting desk to produce designs.
Also, AutoCAD is the originator and proprietor of the widely accepted .dwg CAD file format. In just four years, the application rose to become one of the most widely used CAD applications in the world. A position from which it is yet to be overthrown till today. Over the years, 34 versions of AutoCAD have been released with AutoCAD 2020 as the latest version.

What does AutoCAD do?

AutoCAD which was originally a 2D drafting software for mechanical engineers has expanded to become the go-to software for most things design and modeling, with toolsets that cater to virtually every industry associated with design and engineering.

In Autodesk’s march of supremacy, the company has created several industry-specific AutoCAD products. These include AutoCAD Mechanical, AutoCAD Architecture, AutoCAD Electrical, AutoCAD Plant 3D, and AutoCAD MEP (Mechanical, Electrical, and Plumbing). In 2019, these products were all united as toolsets under a single software package.

The mechanical tool set is for DFM (Design For Manufacturing). Its features are dedicated to creating, modifying, and documenting mechanical designs for manufacturing. They allow you to automate mechanical engineering tasks like dimensioning, creating bills of material and generating machine components.

This toolset greatly minimizes your design efforts as numerous mechanical components which had to be designed from scratch are now available for selection as ready-made components in the 700,000+ parts and symbols library.

This toolset is specifically designed for the architecture industry. It has features that allow you to create and document architectural drawings and also automate drafting tasks. Other features include walls, doors, and windows. Using specialized tools, architects can also create sections elevations, floor plans, and other building drawings.

In addition to all these, AutoCAD architecture includes an extensive library of 8000+ intelligent architectural components to help you create your designs.

The electrical tool set contains electrical design features that help you to design, edit, and document electrical circuits and control systems. You can create electrical drawings such as panel layouts and schematic diagrams using specialized tools. Your drawings are all organized in a project-based structure, according to project standards.

This toolset also has an impressive library of over 65,000 intelligent electrical symbols which support various standards. 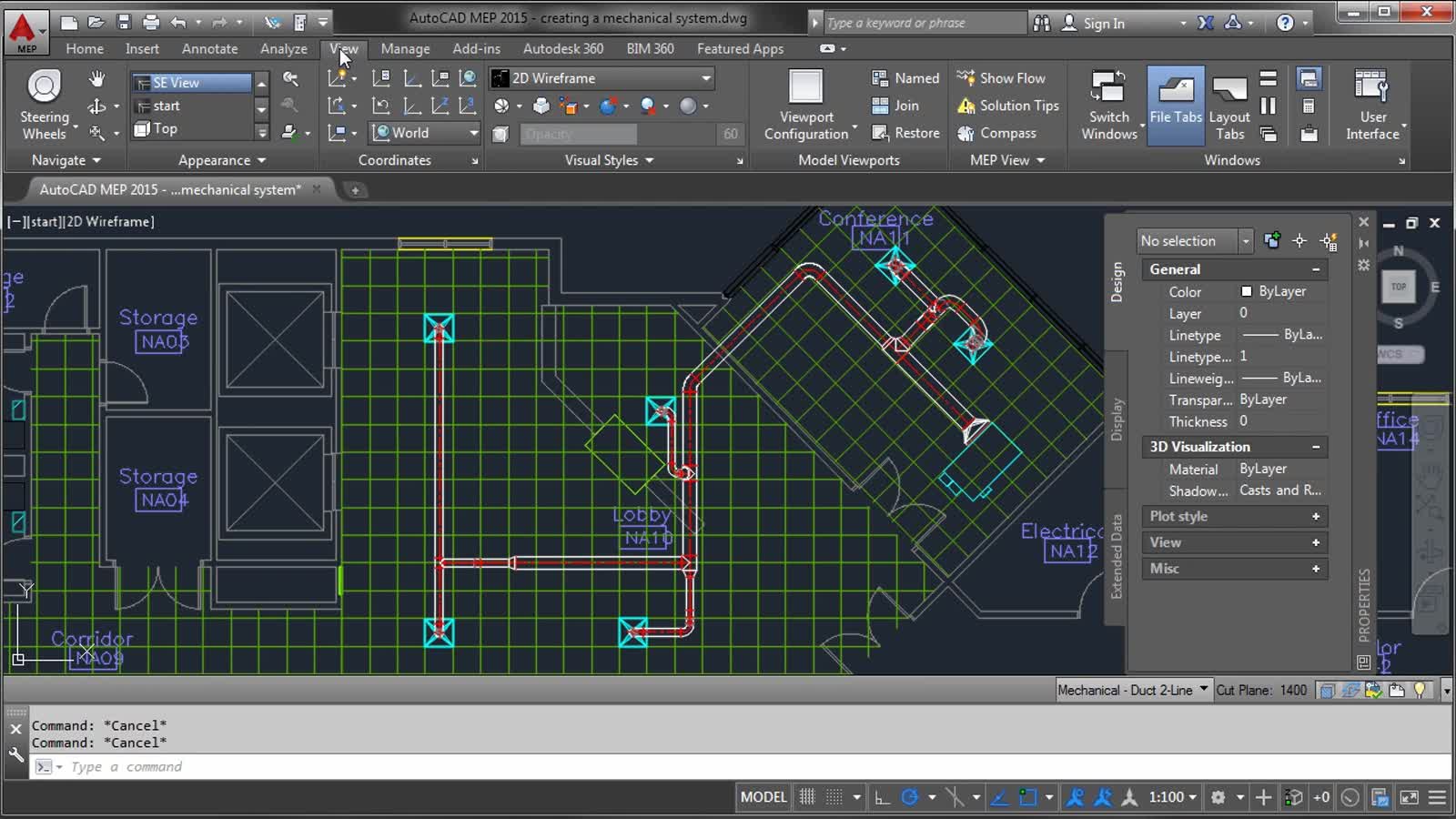 MEP systems are a crucial part of building design today and Autodesk has no intention of disappointing its users. The MEP toolset allows you to create and document MEP drawings for buildings, with over 10,500 intelligent MEP components.

With the plant 3D toolset, you can produce piping and instrumentation diagrams, then proceed to incorporate them into a 3D plant model. This toolset has a library of 400+ plant components such as structural members, equipment templates, and support templates. These make it easy to create very complex plant and pipe routing designs in both 2D and 3D.

With the number of features available in AutoCAD, it is understandable that it is the most ubiquitous CAD software packages available today. The compilation of all the toolsets under one package makes AutoCAD cut across numerous industries. It is safe to say that it can be used by almost anybody that has anything to do with design and engineering.

The following are some of the professions and industries that use AutoCAD.

For even more usability and flexibility, and also to allow you to “take the power of AutoCAD wherever you go, there is Autodesk 360. This is a mobile and web application that allows you to use AutoCAD on either a mobile device or on a remote computer. This app allows you to create, modify and share designs as well as access your files from anywhere.

Compared to AutoCAD, SketchUp is a relatively new software package in the CAD industry. It was developed 19 years ago in the year 2000 by Joe Each and Brad Schell, co-founders of the startup company, @last software. SketchUp debuted as an all-purpose 3D design tool that added degrees of freedom to designers.
6 years later, @last software developed a plugin for Google Earth which so impressed Google that they acquired the company along with its products for an undisclosed amount of money.

In 2007, Google released both a free version and a pro version of Google SketchUp, with the pro version having more functionality than the free version. From then on came numerous versions with increased features such as building maker integration and the “toolbox” feature which allowed users to see their models from various angles.
On the 1st of June, 2012, SketchUp was acquired from Google by Trimble Inc for an undisclosed amount.

Simply put, SketchUp is a 3D design and modeling CAD program that is used in a wide range of applications including civil engineering, architecture, landscaping, mechanical engineering, and video game design.

The main premium versions of SketchUp are SketchUp pro for 3D modeling and SketchUp studio for buildings. These programs allow you to create models through a variety of means such as programming, drafting, and design development. You can also draw details, elevations, and plans, be it mechanical, architectural, and structural. With the applications advance camera and animation features, users can transform their models into animated walk-throughs.

Another interesting feature of SketchUp is the style builder which allows you to add a kind of personal touch to your design. Instead of depending fully on the existing formats to create a design, you have the option of creating your own style from lines you’ve either drawn in an image modifying the application or on paper this allows you to create and apply custom drawing styles to your SketchUp models, thereby making them look different from typical models.

With SketchUp, there is also access to the 3D Warehouse. The 3D Warehouse is a large online library or resource for SketchUp users to either download free 3D models created by other users, or upload their own designs for comments, feedback, and download. This makes the design process much easier as you can simply download models from the library instead of designing them from scratch. There is also an Extension Warehouse which is like the 3D warehouse but for extensions and plugins. These Warehouses double as forums for users of SketchUp. 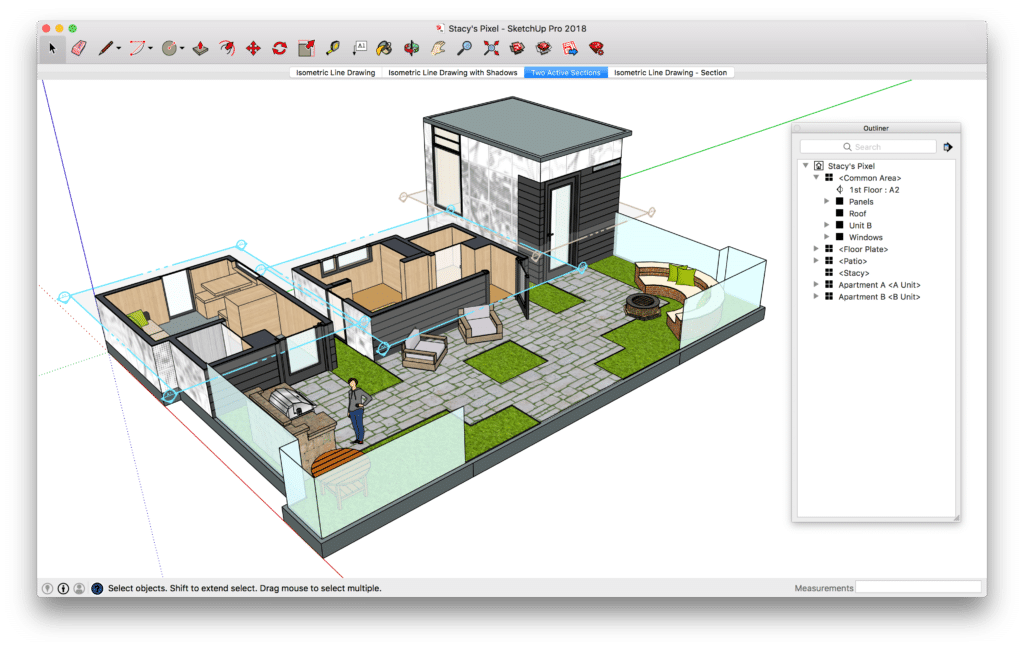 A 3D model of a house and garden in Sketchup (Source)

Presentation is an important aspect of the design process. With the SketchUp Layout feature, you can easily take your sketch up models and convert them into drawings, scaled prints, diagrams, and presentations. You can also add dimensions and labels.

In addition to SketchUp pro and SketchUp studio, there is a free web-based version known as SketchUp free. Although this version does not have the functionality of SketchUp Pro, it allows users to create 3D models and either save them to the cloud or save them as SKP or STL files.

SketchUp is mostly used by creators, engineers, architects, landscape designers, and video game designers. Due to its generic nature, SketchUp is used in a number of industries, although not for overly complex and particular designs. The industries in which the application is most used are architectural design and visualization, product design, rendering and presentation, and interior design.

Prior to the release of SketchUp Studio, SketchUp was mostly used as either a cheap alternative to other CAD software packages or as a hobby software.

AutoCAD is best for industry professionals who know what they are doing and who can make the most of the application’s powerful features. Professional may, however, find SketchUp a bit too basic and appealing. If you are an average level designer and you simply looking to design for fun, SketchUp is best for you.

How Much Does Revit Cost? Pricing Explained
How to Import Images with Autodesk Raster Design