We here at Scan2CAD know that no program is an island—even when it’s the ultimate vectorization software. The range of CAD software is incredibly broad, with specialized programs for practically every design purpose. Each program exists within an ecosystem, and an architect or designer may use several different programs in a standard workday.

Experienced designers will know the ins and outs of each program they work with. However, for a newcomer, it can be hard to get answers to the basic question of which software does what. That’s why, in recent months, we’ve worked to provide useful guides to some of the most popular CAD software on the market. We’ve taken a look at software from Autodesk and Dassault Systèmes, and introduced users to lesser-known programs, such as Vectorworks.

In this article, we’ll be focusing on two of CAD’s big beasts: AutoCAD and SolidWorks. As the respective flagship programs for CAD powerhouses Autodesk and Dassault Systèmes, they’re certainly worthy of our attention. We’ll delve into the differences between these popular applications, and find out which is best suited to which purpose.

Whilst you’d be hard-pressed to find a CAD professional who isn’t familiar with AutoCAD, not everyone is aware of its backstory. Its origins lay in the little-known, late-70s software Interact CAD. Originally developed by programmer Mike Riddle, Interact CAD was acquired by Autodesk in the early 1980s. Autodesk then worked to develop the program further, and eventually chose it as the company’s flagship software, renaming it AutoCAD.

The first release of AutoCAD came in 1982, and it was immediately revolutionary. AutoCAD was the first CAD software built to run on PCs, rather than minicomputers. The public reaction was incredibly positive: within just a few years, AutoCAD had grown to become the most widely used design software in the world.

New releases over the years have brought new tools and functionality to AutoCAD. AutoLISP came with the 1985 release, the ability to open multiple drawings came in AutoCAD 2000, and object transparency came in AutoCAD 2011.  The most recent version, AutoCAD 2018, came out in March this year, bringing support for 4K monitors and a new version of the DWG file format.

AutoCAD is a flexible CAD program that allows users to work in a variety of ways. Initially, the software specialized in the creation and editing of 2D geometry. However, over time, it has come to encompass a number of 3D modeling functions, including solids, surfaces, and meshes. It’s worth noting, though, that most people predominantly use AutoCAD for 2D drafts, rather than 3D modeling.

Other features of AutoCAD include the ability to annotate drawings, attach and import data from PDF files, and to extract object data to tables. 3D editing also brings with it the ability to view models in various viewports. Meanwhile, there is a variety of customization options, as readers of our guide to learning the AutoCAD basics in one hour will be familiar with.

Most users who work in AutoCAD will save their files in the native DWG file format. The format was initially exclusive to the software, but, given the necessity for designers to collaborate, many ways to view DWG files without AutoCAD now exist. AutoCAD also supports other vector file formats, notably including DXF.

By the late 90s, AutoCAD had established itself as the most widely used CAD software in the world. It should come as little surprise, therefore, to learn that AutoCAD has found users across many industries. Many of our own users use Scan2CAD to convert from PDF to vector formats specifically for use in AutoCAD.

Autodesk has responded to the widespread popularity of AutoCAD by creating a range of industry-specific ‘flavors’ of the software. Each of these versions has an individual design and set of custom features. The distinctiveness of these ‘flavours’ is easy to spot—compare the above screenshots of AutoCAD Electrical and AutoCAD Architecture.

However, the differences are more than surface-deep. Here are just a few of the features bundled with each industry version of AutoCAD:

All in all, virtually every design and engineering sector on the planet has, to some degree, made use of AutoCAD. However, it isn’t the only show in town. First off, there are plenty of affordable AutoCAD alternatives offering similar functionality to Autodesk’s flagship software. However, some CAD programs distinguish themselves by offering something different. Enter SolidWorks.

SolidWorks today is well known as one of Dassault Systèmes’ flagship applications, but it actually started life outside the company. MIT graduate Jon Hirschtick founded the SolidWorks Corporation, the company which first developed the software, in 1993. After two years of work, the first version of SolidWorks was ready for release in November 1995. It was an instant hit, bringing solid modeling to a wider audience than ever before.

In 1997, Dassault Systèmes acquired SolidWorks for $310 million. It was great news for SolidWorks, who were able to take advantage of Dassault’s clout and existing CAD experience—the latter having already developed the powerful CATIA software. Meanwhile, Dassault Systèmes reaped the benefits of their new acquisition, which, over time, acquired a user base of over 3.2 million.

Already a powerful tool when first released, SolidWorks has undergone major development over the years. From 2001, the program was one of the pioneers in incorporating simulation within the design process. More changes came with the most recent edition, SolidWorks 2018, which arrived just two short months ago. The version brought the ability to sketch freehand on touch screen devices, and integrated CAM and topology study tools for the first time. 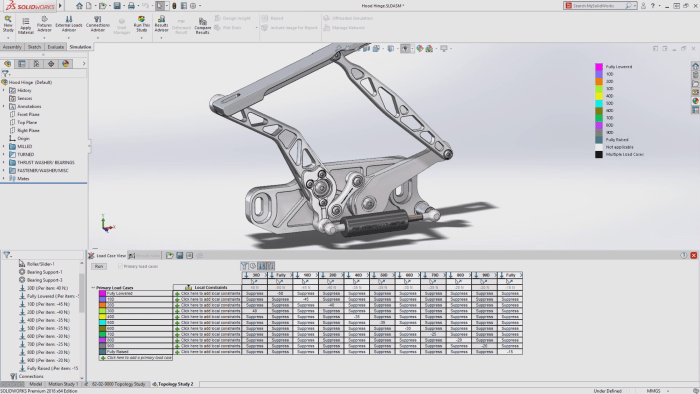 The name is a giveaway: SolidWorks is a solid modeling application. It employs a parametric feature-based approach to model creation. In layman’s terms, this means designers create models using engineering terms, such as bosses, holes and slots, rather than using geometric terms.

Though best known for its 3D CAD functionality, SolidWorks also allows users to draw accurately in 2D. In fact, SolidWorks models typically start life as 2D sketches. From there, users can extrude their parts into three dimensions using a number of available tools.

SolidWorks, however, has long aimed to be more than simply a drafting application. As noted above, the software has included simulation tools for over a decade, allowing users to test their parts by simulating real-world conditions. These tools include computational fluid dynamics (CFD) tools, the ability to simulate fluid flow, heat transfer and fluid forces, and life cycle assessment (LCA) features.

Additionally, the software includes powerful rendering features which enable users to see photo-realistic visualizations of the parts they create. Other tools in SolidWorks’ extensive arsenal include PDM packages, and a range of electrical solutions that make it simple to create accurate schematics and circuit data. 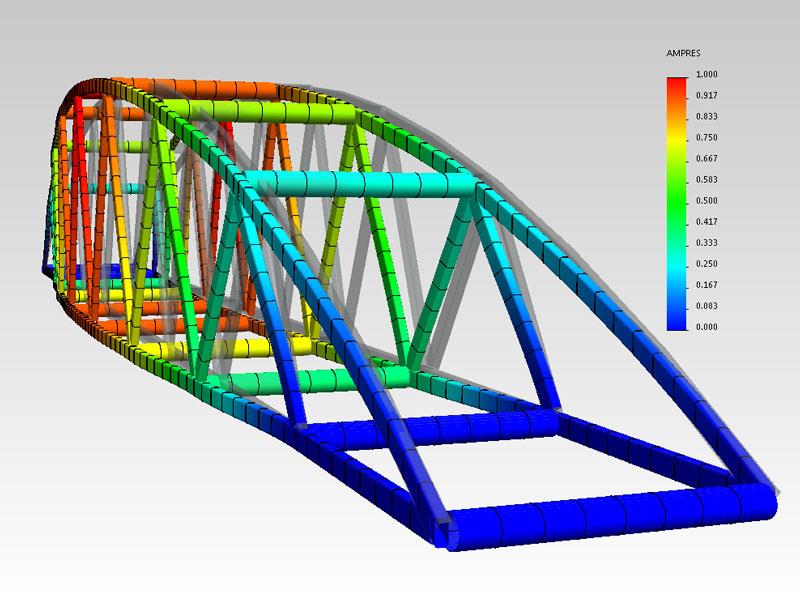 With such a wide range of different features, it comes as little surprise to learn that SolidWorks has users across numerous industries. Firstly, this includes a number of businesses in commercial industries that rely on SolidWorks for their day-to-day operations. Key sectors here include the aerospace and automotive industries, including major clients such as Amtrak and BAE Systems.

As a major modeling program, engineers naturally also form a major part of the SolidWorks user base. SolidWorks’ integrated simulation tools make it easy to evaluate designs and materials before creating physical prototypes. One engineering client is Daka, which managed to achieve 50% development cost savings on its sea scooter.

SolidWorks users include both traditional industries, such as construction, oil and gas, and emerging sectors, including alternative energy and robotics. With so much on offer, a range of SolidWorks packages are available to meet various industry needs, including:

You’ve heard plenty about both programs so far—but when it comes to AutoCAD vs SolidWorks, which is best for you? In the table below, you’ll find plenty of useful information to help you make an informed decision.

As you can see, there are plenty of benefits to both AutoCAD and SolidWorks. Those in the AEC sector, as well as mechanical and electrical drafters should consider AutoCAD. This is also a great choice for anyone working exclusively or primarily in 2D. For most 3D CAD purposes, though, SolidWorks is likely to be the way to go. It’s also ideal for those working in the automotive and aerospace industries, and boasts a wider range of simulation and visualization tools.

Whichever option is best for you, you’ll be pleased to learn that both programs accept DXF files. This means that you can convert from raster or PDF to DXF using Scan2CAD, and get started in no time.