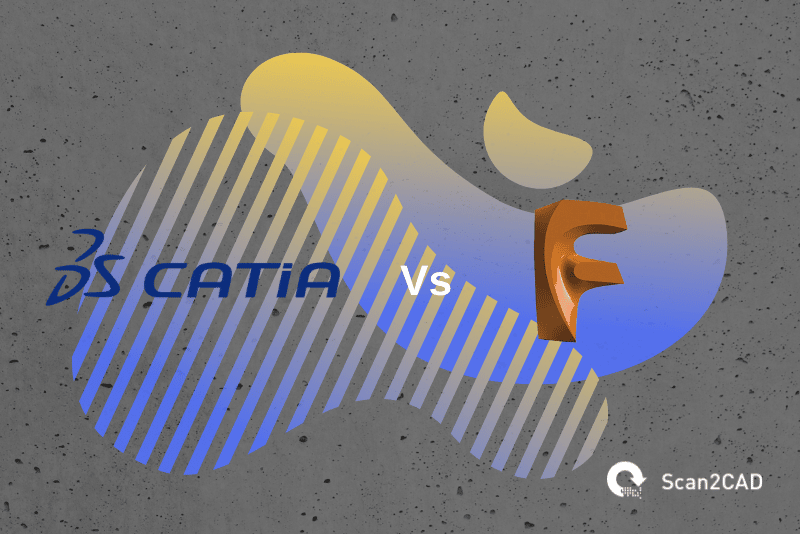 For any computer-aided design (CAD) software category in existence today, Autodesk has its in-house proprietary software. Despite being a force to reckon with, competitors exist and they also do well, ultimately rising to industry-leading standards. To this end, as Scan2Cad, we’ve compared several of these competing CAD products, namely AutoCAD and SolidWorks, AutoCAD and DraftSight, and Autodesk Inventor and SolidWorks. And in this guide, we add another comparison to the list – between Dassault Systèmes’ CATIA and Autodesk’s Fusion 360.

The increased need for computer-aided manufacturing (CAM) and CAD software – owing to the convenience and other numerous benefits – has compelled developers to develop these software products to meet customers’ needs. Each of these products is distinct in its unique way, through the features and functionalities it offers. But there are also numerous similarities, the first of which is the category they fall under because of the similar capabilities and functions they offer.

CATIA and Fusion 360 are similar in that sense – they’re used for product development, from the first stage (conceptualisation) to the last (manufacturing). Being from different developers, however, they’re different. This makes it necessary to review both of them and to explore their major differences, features, and history in the hope that we’ll assist in your decision-making process.

Avions Marcel Dassault (AMD) first released CATIA in 1977 as CATI. At that time, it was an in-house software that AMD, a French aircraft maker that was later renamed to Dassault Aviation in 1990, used. CATI was developed to enable AMD to undertake 3D surface modeling and numerical control while using the CADAM software that was primarily a 2D software.

The aircraft maker created a subsidiary called Dassault Systèmes in 1981, and thus CATIA was born following the renaming of CATI. Like its previous name, CATIA is also an acronym that stands for computer-aided three-dimensional interactive application.

The journey since its first release has seen the development of many versions culminating in 3DExperience CATIA V6 R2021X and CATIA V5-6R2018.

You may have noted that there are two different versions of CATIA – the V6 and V5. They’re mostly the same with the only difference being the supporting architecture. V6 is V5 that has an integrated data management platform that is more or less a cloud-based database. The database on V6 is known as ENOVIA and it deals with some of the collaboration problems that could affect customers using V5.

While in V5, all the data is stored in local files, in V6, the information is stored in an online server that can be accessed by other users within an organization. V6 also has a few enhancements up its sleeve but for the most part, both V6 and V5 share the same design architecture and, therefore, have an identical interface.

If you work in a large organization in which product development requires the input of multiple designers and engineers, then V6 is the best option because it makes collaboration easier.

That aside, what does CATIA do? CATIA is a parametric modeling software that combines product lifecycle management (PLM), CAM, computer-aided engineering (CAE), and CAD. It achieves each of these functions through some distinct features. For instance, it enables assembly and disassembly of parts, with the latter permitting the analysis and redesign of each component that makes up a given part. Dassault Systèmes refers to this as creating a design session since it allows the designer or engineer to focus on just one section.

CATIA also permits modification of assembled components, allowing designers to make changes on the go without having to disassemble a given section. Additionally, this feature is such that a designer can isolate a single component or surface, say the contact surface, virtually, doing away with the need to model other parts or components with which the surface will interact. This smoothens and fastens the design phase of product development.

Furthermore, the assembled parts and components can interact with each other simulating the actual movement as though the product were in use. In the recent releases, Dassault Systèmes has improved CATIA’s simulation capabilities in that it now enables a designer to come up with a law, feed it into the software, and then use it to apply controlled variable forces. The simulation is also as realistic as possible since CATIA has integrated friction properties, centrifugal forces, stress analysis, and a capability that allows for multiple excitations and measures. 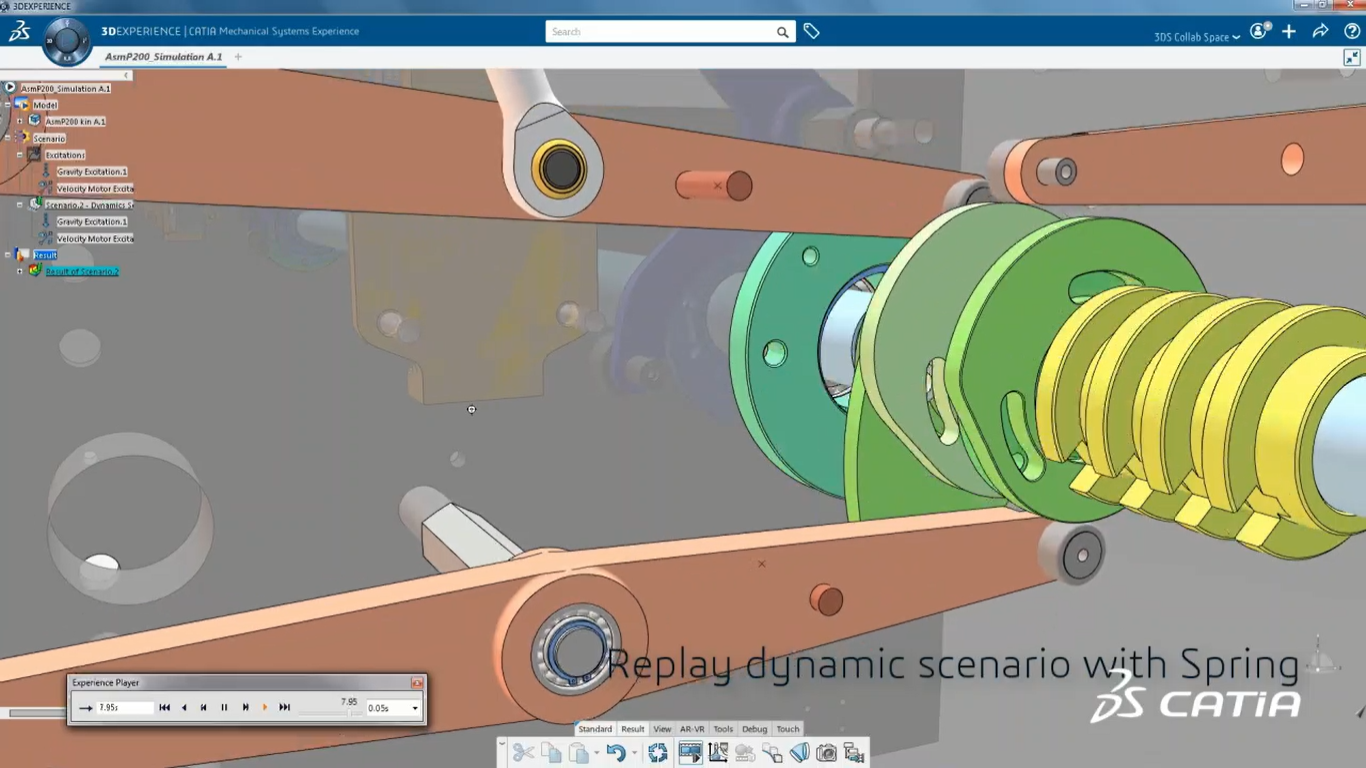 Interaction between surfaces in CATIA (source)

Through this interaction and resultant visualization, the user can tune and optimize the mechanism and operation of each given component to ensure seamless functionality upon manufacturing.

Thanks to the cloud-based collaboration that V6 brings on board, every member of the product development team can access the models, and make changes in real-time. V6 also has a marketplace option that connects businesses. As a result, if your organization doesn’t have a 3D printer, you can easily find a 3D printing company via the marketplace option, without leaving the CATIA interface.

Interestingly, CATIA isn’t only limited to manufacturing engineering. Civil engineers and construction professionals can also use it to model civil works and perform steel structural design. The former mainly concerns road and railway designs, whereby CATIA enables construction professionals to design a road or railway surface while incorporating vital parameters such as alignment, superelevation, and the general terrain. CATIA also computes the volume of earthworks that needs to be filled or removed for the rail or road surface to follow the desired vertical alignment. 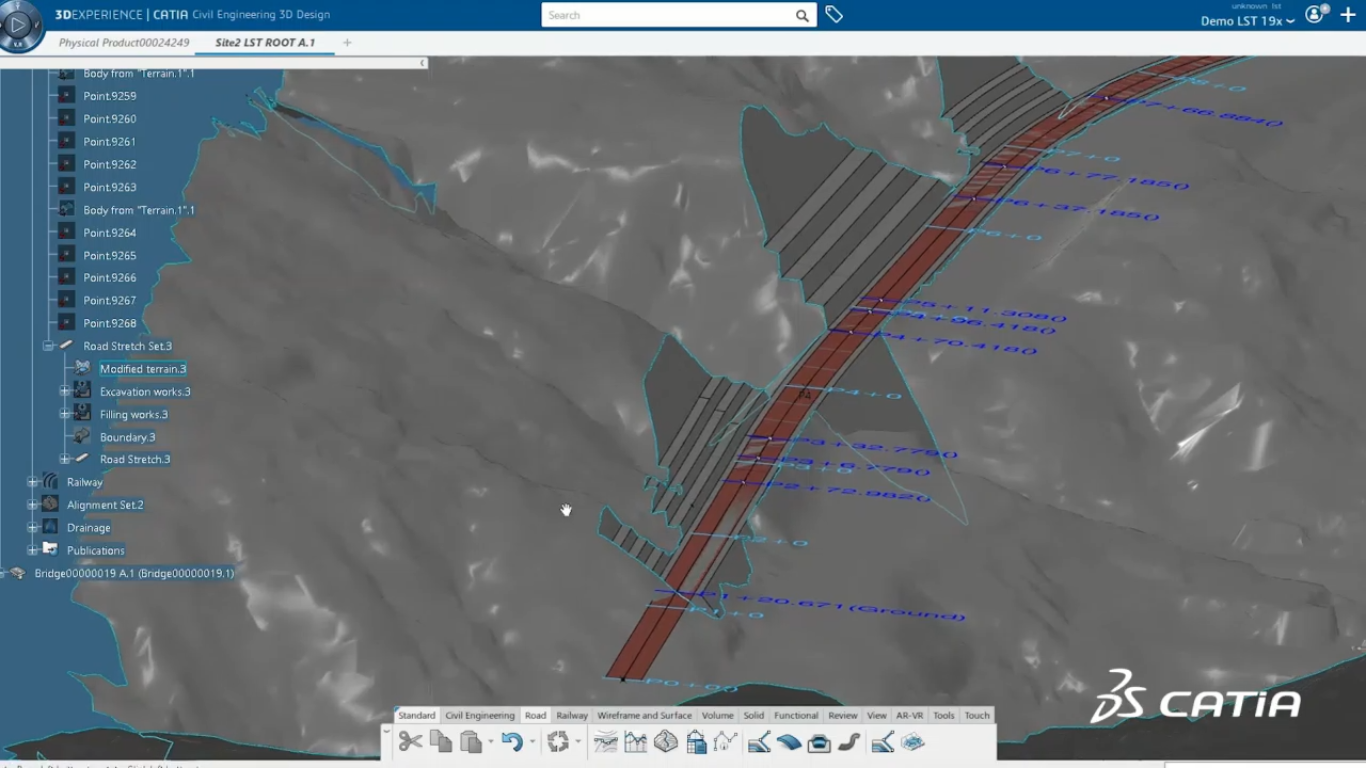 Autodesk Fusion 360 is just 7 years old, having been first released in 2013. Although it’s a new entrant, it has grown to be a favourite, perhaps because it’s an Autodesk product. However, observers attribute its success and popularity to the fact that it accommodates hobbyists and has affordable licensing bundles that have them in mind. It provides an opportunity for those just starting.

The number ‘360’ in the software’s name immediately says something about it – that it’s a cloud-based software. 360 is Autodesk’s cloud solution parlance. Fusion 360’s cloud service, and by extension Autodesk’s, enables its customers to collaborate, edit, render, upload, and access files from anywhere.

Fusion 360’s cloud promotes seamless collaboration because anyone can comment or provide input from any device without necessarily having installed the software on their respective gadgets.

Fusion 360 is a CAM and CAD software. The combination of these 2 capabilities means that designers and engineers use Fusion 360 to conceptualize and visualize concepts. The conceptualization process on this Autodesk software begins with sketches, which are usually in 2D. It truly leverages layout sketches from which the designer can then extrude into 3D objects. The resultant 3D objects make visualization a possibility. 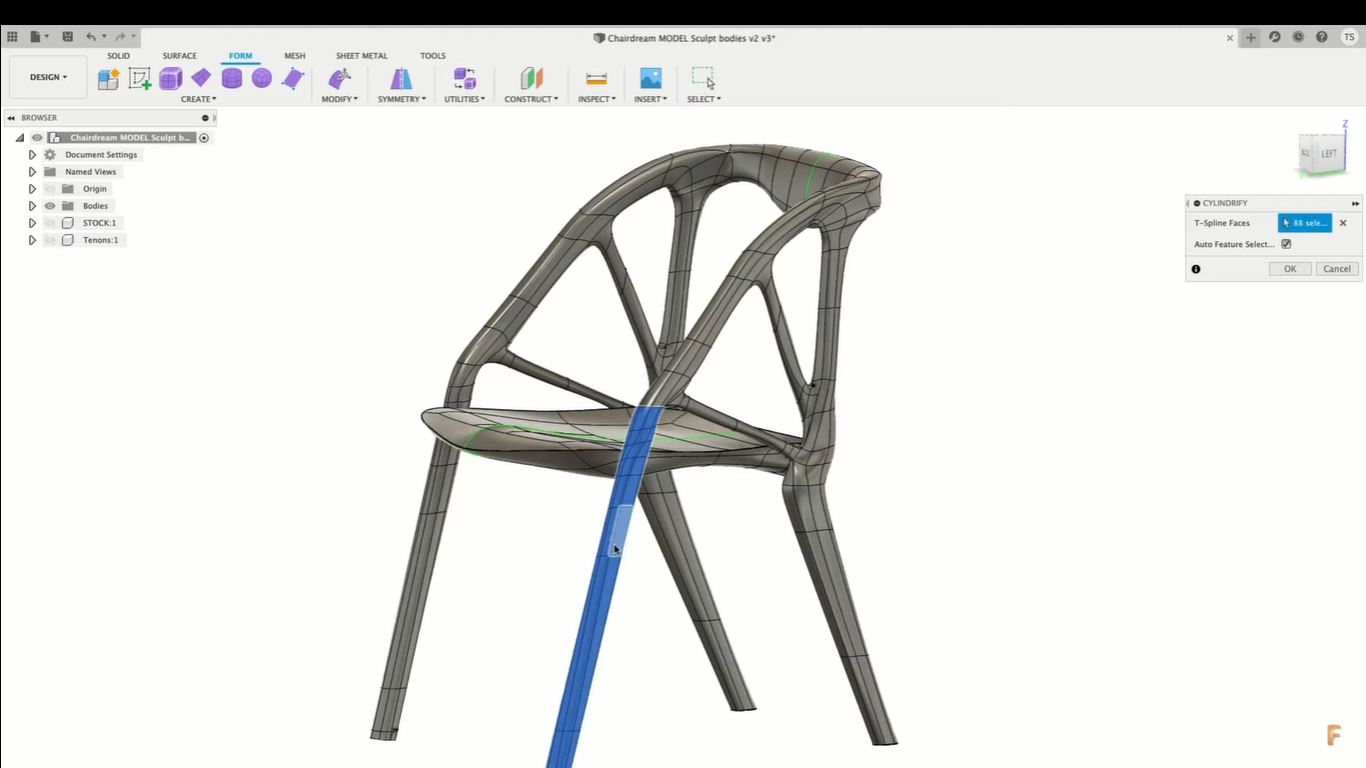 However, there exists a downside. While it permits sketching, it does a shoddy job at enabling designers to sculpt as organically or artistically as possible. This is because it mainly leans towards its CAD capabilities, which, for a long time, has been Autodesk’s primary forte. Sculpting refers to the use of tools such as pinch, pull, push, smooth, and grab to manipulate a digital object similar to how a potter would, using clay.

The upside to the reliance on CAD is that the designers can still use the tools to create precise models – thanks to the fact that it blends both CAD and 3D modeling. This, therefore, implies that it’s not as rigid as AutoCAD. The flexibility that Fusion 360 creates a freeform modeling environment that allows designers to work with their imagination. Through this, they can explore many shapes, iterate them, and repeat various commands continuously until what they can see on their screen is what they had imagined.

Additionally, Fusion 360 works with an engineer’s ideas in cases where such an individual doesn’t have a conceptualized understanding of what the structure of the design or product is. The software also enables engineering analysis of models from other systems as well as those created using Fusion 360. But here’s the catch. It does this without requiring any translation. All the engineer needs, in such cases, is to use the major 3D formats or standard neutral file formats.

Fusion 360’s approach to 3D modeling is anchored on mechanical engineering. As such, it includes tools that simulate the milling of products, as shown in the embedded video. It avails many milling tools from which a machinist can choose. These milling tools – found in a section within Fusion 360 known as the tool pad – can be created from a model and will remain in the database for future use.

Fusion 360 is mainly reserved for mechanical engineering functions. As such, it’s appropriate for machinists and designers responsible for producing mechanical parts. However, it’s not ideal for the automotive and aerospace industries wherein the conceptualization and design of complex parts is the order of the day.

Why? Because Fusion 360 doesn’t permit seamless correction of even the smallest of measurements. Changing one dimension has a ripple effect that will require the designer to also change all the other dimensions within the section or part. Fusion 360 doesn’t make alterations easy or automatic. Furthermore, drawing complex parts slows down the Fusion 360 engine in computers that don’t meet the minimum system requirements.

Fusion 360’s licensing makes it ideal for hobbyists. But without basic knowledge of CAD technical language, then Fusion 360 has a steep learning curve – the inverse is also true.

The basic features for these two 3D modeling software stand out by now. You probably have an idea of what each has to offer. But, in summary, what are the differences?

If you’re a beginner, then Fusion 360 is an ideal software for you. It’s cheaper and has fewer features which make it an essential product for modeling less complicated parts. However, if your line of work includes working on complex parts for the automotive or aerospace industry, then CATIA is the best product for you. But keep in mind that it’s an expensive product.

How to Insert an Image into CATIA
CATIA vs Inventor: CAD Software Compared