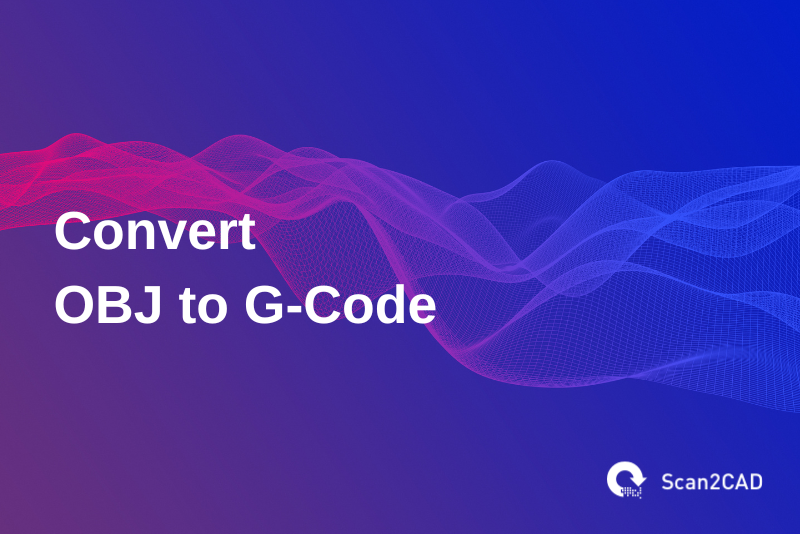 The OBJ file format has become a vital part of 3D printing. It offers several advantages over its more popular alternative, the STL file format. Some of these advantages include support for color and texture as well as better quality 3D models. The OBJ is also versatile in that it is used in game development, 3D graphics design and modeling. However, our focus today lies in 3D printing. Specifically, we shall explore how to convert OBJ to G-code, the indirect method of printing OBJ files – as you cannot directly print OBJ files. We shall also detail how you can convert OBJ to STL for slicing to take advantage of the popularity of the STL file format, which is supported by many 3D slicers.

What is OBJ File Format?

OBJ, also known as Wavefront OBJ, is a shortened version of the word ‘Object.’ First developed, defined, and used by Wavefront Technologies beginning in 1990, OBJ was initially intended to define the geometry and other properties such as color and texture, particularly in Wavefront’s Advanced Visualizer. The file format was also intended to facilitate the transfer of geometric data between the Advanced Visualizer and other applications.

In the mid-1990s, however, Wavefront Technology relinquished control of the definition, revision, and distribution of the OBJ file format, effectively making it vendor-neutral. And it is this neutrality that has made the file format popular and somewhat universal. Currently, multiple 3D software applications are capable of opening it. But as we have detailed below, not all 3D software can open OBJ files.

OBJ is an ASCII-based format that represents properties of 3D objects using a character set that contains numbers from zero to nine, English letters from A to Z, and special characters such as decimals. These characters are contained in mathematical equations that represent tessellated polygons. Specifically, the equations denote the polygons’ elements, such as geometric vertices, lines, points, faces, curves, and free-form surfaces.

The format specifies these elements using keywords. For instance, geometric vertices are represented using the keyword “v.” Other keyword representations include p (for a point), l (for a line), curv (for a curve), curv2 (for a 2D curve), and surf (for a surface). That said, the OBJ files that are encountered most frequently only contain polygonal faces and are therefore defined using the v and f keywords.

These elements can be placed into groups – represented using the keyword “g” – for convenience or to promote seamless rendering. Moreover, the OBJ file can contain comments, as shown in the screenshot below. 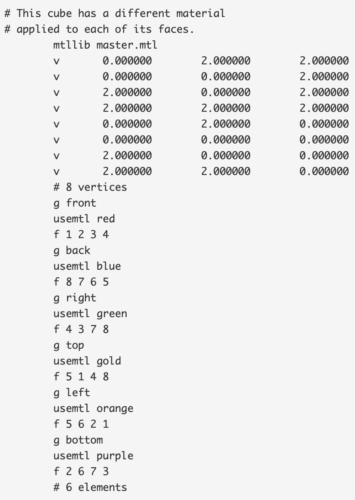 It is also worth mentioning that not all 3D software applications can open OBJ files. This is because not all of them can seamlessly deal with freeform surfaces that are defined using mathematical equations.

The OBJ file format is most commonly used for the following:

As the name suggests, a 3D printer creates a three-dimensional object, often from a digital 3D model that is contained in an STL or OBJ file. The creation process involves linear movement along the X, Y, and Z axes. Driven by motors, this movement is defined and controlled by commands contained in a language known as G-code. These commands exist in lines of code that are executed one after the other in a systematic process that constitutes 3D printing.

Indeed, 3D printing is revolutionizing manufacturing. And although the process might sound as straightforward as hitting the “print” button on the interface of a 3D software program, it is not. This is because the 3D model first has to undergo what is known as slicing – typically, slicing divvies the 3D model into vertical layers to simplify the 3D printing. Slicing is carried out by software known as 3D slicers.

To create a 3D object, the 3D printer deposits a hot extrusion of a material, such as molten plastic, incrementally in layers. Each layer is confined to the X-Y plane that defines the lateral movement of the nozzle. Upon completion of one layer, the nozzle moves upwards, with the movement’s height corresponding to the next layer’s thickness. (In some printers, the nozzle maintains a stationary vertical position, with the bed moving along the Z-axis.) The printer’s nozzle then proceeds with the extrusion process within the X-Y plane that is associated with that new layer. G-code defines these movements.

How to Convert OBJ to G-Code?

As stated, 3D printing an OBJ file is not as straightforward as printing a file such as a Docx or PDF. This is because OBJ cannot be printed directly. Instead, the 3D model contained in the file has to undergo a process known as slicing conducted by 3D slicers. Slicing converts an OBJ file/model to G-code, a language that a 3D printer can understand.

To convert OBJ to G-code, simply follow the procedure below:

There are different slicers in the market that convert OBJ to G-code. These include:

It is noteworthy that some 3D printer manufacturers also develop 3D slicers. Even so, some of these programs are based on the above-mentioned 3D slicers. For instance, Creality, a leading 3D printer supplier and manufacturer, offers the Creality Slicer software, a modified version of Ultimaker Cura. However, such modified applications do not always support the OBJ format right off the bat. Instead, as the user, you must tick a checkbox during installation to enable this support. But the fact that the manufacturers include them as part of the purchase simplifies the search for a good/reliable slicer.

At the same time, some universal 3D slicers, i.e., those not offered by or associated with a 3D printer manufacturer, do not support the OBJ format. This is because, as stated previously, OBJ is less common/popular than STL. Some examples of 3D slicers that only support STL include Astroprint Smart Slicer and OctoPrint. Therefore, you cannot use such software to convert OBJ to G-code.

Here are some important considerations you should make when choosing a 3D slicer:

A good 3D slicer should support multiple file formats. Given the disadvantages of the STL file format, it goes without saying that 3D designers will often want to work with better file formats, one of which is the OBJ. Thus, a good slicer should be capable of opening OBJ files as well as converting them to G-code.

Some 3D slicers, such as Ultimaker Cura, are available for free. Others, on the other hand, are only usable upon paying a subscription fee. Nonetheless, the paid-for programs do not always offer value for money. In most cases, freeware such as Cura will perform the same functions as the premium tools at no extra charge and without compromising the quality.

An excellent 3D slicer should allow you to tweak the 3D printing settings. These settings enable you to get the best results when you finally start printing the 3D model.

Ultimaker Cura supports multiple 3D printer profiles, meaning it is a universal slicing tool. This comes in handy, particularly when you are unsure of the 3D slicer to choose.

There are different types of 3D printing technologies. Examples include Fused Deposition Modeling (FDM), Stereolithography (resin printing), Electron Beam Melting (EBM), Selective Laser Sintering (SLS), and Selective Laser Melting (SLM), just to mention a few. And just like how each 3D printer only supports one of these technologies, 3D slicers also only support one technology. Thus, if you are looking for a slicer that supports FDM, you cannot go wrong with Cura or Simplify 3D. Similarly, if you want to undertake resin printing, simply go with PrusaSlicer or Chitubox.

OBJ to STL Conversion for Slicing

Given the non-universality of OBJ, can you alternatively convert OBJ format to STL for slicing? If you are not looking to create a multicolor or colored 3D object, then yes, you can convert OBJ to STL. However, it is worth pointing out that the converted file might take a hit in terms of the quality and resolution of the 3D model. But this might be a small price to pay, mainly if you are used to working with the STL model and the slicer you have come across does not seem to open an OBJ file or slice it in the desired fashion. That said, if you are looking to print in color, we advise that you stick with the OBJ format.

You can use online or offline conversion tools to convert OBJ to STL for slicing. Of the two categories of conversion solutions, we recommend that you use offline converters. This is because they offer autonomy over your files. By this, we mean that you do not surrender control of your sensitive files to third parties. And given that some third parties do not uphold the highest standards of online security, your files may end up in the hands of unauthorized individuals.

Though not as popular as the STL format, particularly in 3D printing, OBJ is still as practical as it is versatile. The OBJ file format enables you to print colored or multicolored 3D objects. However, this format cannot be printed directly. This means you must first convert OBJ to G-code using a 3D slicer. A 3D slicer divides the 3D model into layers. It subsequently creates commands that specify the path a 3D printer’s nozzle should follow in order to create the physical object.

Even so, not all 3D slicers support the OBJ format. So, it is crucial to determine beforehand the kinds of file formats your preferred slicer supports. And if you cannot decide, you can convert OBJ to STL for slicing.

As a registered civil engineer with a strong penchant for technology and new tech trends, it is my pleasure and joy to share my tech and CAD/CAM software knowledge and experience.
View all posts by Kevin →
How to Convert STL to G-Code
How to Convert DWG to G-Code