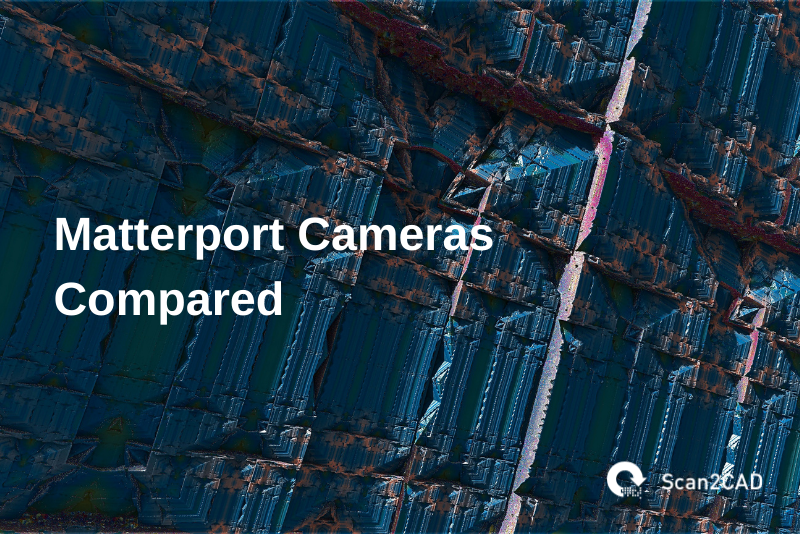 Matterport is as much a 3D virtual tours software provider as it is a hardware developer and seller. Its hardware offerings include the Pro series 3D camera, currently in its second iteration, and a motorized mount, which enables mobile phone users to seamlessly and conveniently capture 3D scans using the Matterport Capture App. The 3D camera is just one of several 3D and 360º cameras Matterport users can use to capture 3D scans of their spaces. This Matterport camera comparison article will discuss all the cameras Matterport recommends, ultimately answering the question: what camera should I use?

Matterport is a software, hardware, and spatial data intelligence company that offers an eponymous spatial data platform. This platform enables users to upload 3D scans of different spaces in order to create 3D models that they can then use for design, building, facilities management, or promotion. Simply, it facilitates the digitization of spaces, creating 3D virtual twins that can be viewed online through a web player in what is known as a virtual tour.

The platform has so far been used to capture more than 15 billion square feet of data and growing. This ever-growing volume of spatial data has meant that Matterport is continually building the world’s largest digital library of data, which it can in turn use to improve different functionalities within its arsenal of products.

For instance, in 2020, the company launched the Matterport Capture app for iOS and a year later rolled out the application to Android phones. While mobile phones are currently not equipped with the requisite sensors to capture 3D scans, the Capture app uses artificial intelligence, trained using data from the company’s extensive library, to convert 2D/flat images to 3D scans and models.

The library has also enabled Matterport to offer spatial intelligence, integral to facilities management. For example, these professionals can use the platform to narrow down the number of scanned spaces that have particular characteristics from a pool of thousands of spaces. This is especially useful for facilities managers working for organizations such as fast-food brands with thousands of stores.

The platform is available to a wide array of users, including hobbyists, professionals, enterprises, and businesses. To meet their needs, Matterport offers various packages, each of which is priced differently. Hobbyists, for example, can benefit from the free package, while realtors can use the professional, business, or enterprise package. Matterport’s offerings and packages target different industries, including:

To enable its users to capture high-quality scans, Matterport offers the Pro series 3D cameras. And just like you may opt to use Matterport alternatives, you can also elect to use other cameras from third-party providers. However, these cameras must fulfill certain basic requirements. In this Matterport camera comparison article, therefore, we will list and discuss the other cameras supported by the Matterport platform.

The story of the Matterport camera begins with a hack (yes, you read that right). In 2011, Co-Founder Matt Bell was among many hackers who had realized the power of Microsoft Kinect. A motion-sensing input device, Kinect enabled video game players to play with their bodies. They eventually identified other uses for it.

In Bell’s case, he had envisioned a device that, when coupled with software, would enable users to capture real estate spaces or products. Bell attached a camera to his Kinect that he had, in turn, plugged into his laptop. Bell regards this as the company’s first prototype (a good proof of concept). Now discontinued, Kinect, which Bell described as the first consumer-level device that could see in 3D, inspired the creation of the 3D equivalent of a camera.

In fact, in order to create the company’s first 3D camera, Matterport worked with PrimeSense, the organization that had developed the internal components of the Kinect. As a result, Matterport’s first camera, the Matterport Pro1 3D camera, incorporated three of PrimeSense’s sensors. Matterport launched the camera in 2014 with the launch of the 3D media platform that also consisted of the Matterport Web Player and cloud services.

Bell is credited for inventing the 3D camera, known as Matterport Pro1 (the first iteration), with his Co-Founder Dave Gausebeck responsible for creating the software (hardware integration and algorithms that drove the 3D creation tool).

The Matterport Pro 3D camera captured raw 3D scans that the software, a real-time 3D reconstruction platform, then used to create 3D models of buildings. The combination of its hardware and software shortened the time it originally took to create 3D models – from weeks to between 30 and 45 minutes (for a typical three-bedroomed house). It also required fewer professionals.

In 2017, Matterport released the second and latest iteration of its 3D camera, the Matterport Pro2. This 134-megapixel camera uses an infrared sensor and captures high-quality 4K two-dimensional images as well as state-of-the-art three-dimensional and virtual reality (VR) floor plans and walkthroughs.

In addition, it generates spherical images and 360º views, which make it easy to capture and communicate the appearance and depth of spaces. It also has in-built GPS technology that facilitates automatic geotagging of locations. Furthermore, the camera also has advanced social sharing and syndication features. 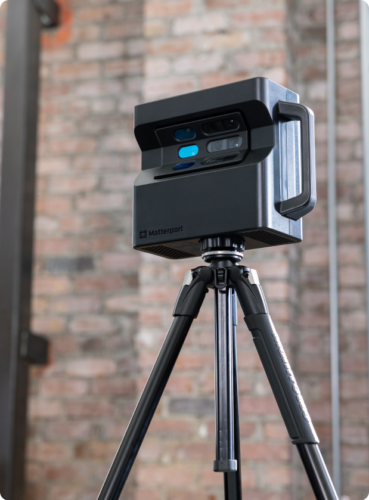 We begin our Matterport camera comparison analysis by looking at Matterport’s two iterations of 3D cameras. These are the Matterport Pro1 and Pro2 3D cameras. It is, however, important to point out that although Matterport develops and sells proprietary 3D cameras that also capture 360º images/videos in outdoor settings, the platform supports cameras from other manufacturers as well. But the software limits this support to 360 cameras from a limited selection of manufacturers, as discussed later.

Matterport’s first and second generations of its 3D cameras differ in many ways. But this does not mean that they do not have some similar features. After all, they are all Matterport cameras. The Matterport camera comparison table below summarizes the similarities and differences.

The similarities between Matterport Pro1 and Pro2:

Matterport also offers a lighter (weight) and cheaper version of the Pro2 3D Camera called the Pro2 Lite 3D Camera, which was launched in 2018. The grey Pro2 Lite (instead of black) debuted at $2,495.

Matterport 360º Cameras from Other Manufacturers

As detailed, Matterport supports cameras from third-party providers as part of a horizontal platform strategy. This strategy targets the entry-level segment of the virtual tours market, which does not need the image quality, performance, and accuracy offered by the Matterport Pro series camera. That said, the cameras must fulfill several basic requirements. At a minimum, they must support Wi-Fi connectivity in addition to being 360º cameras. The latter requirement means Matterport does not support DSLR cameras.

It is noteworthy that the Leica BLK360 is a precision pro camera, while the rest are entry-level cameras. This means that the Matterport Pro series 3D cameras, which the company regards as the Professional line of cameras, are the middle ground between the Precision Proline and entry-level cameras. 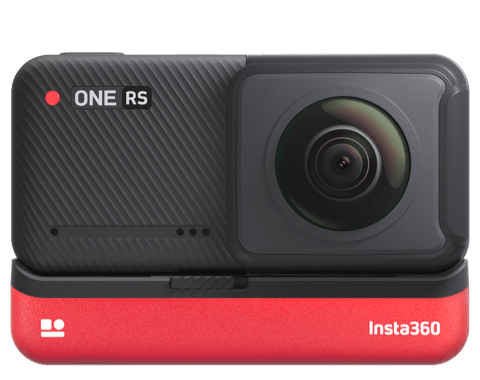 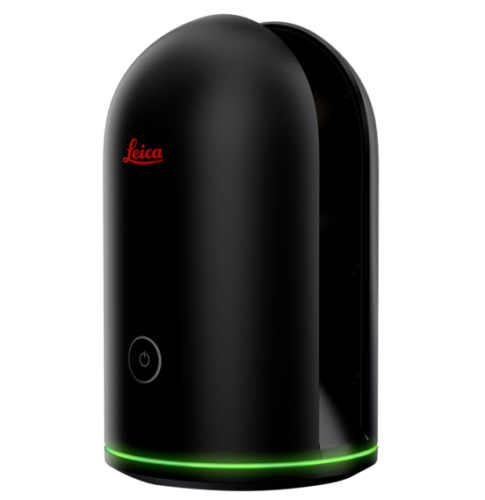 Which Matterport Camera Should You Use?

Matterport supports different 360º cameras, enabling a wide selection of users to enjoy its platform’s benefits. The choice of the camera depends on the nature of your work and your budget. It is also dependent on the features and capabilities of the camera, i.e., does the camera capture 3D scans, or does it only capture 360º images? The Matterport camera comparison tables above have broken down what each camera offers.

Your nature of work will dictate the level of accuracy and precision required of the scans. So, if your work requires high-precision, high accuracy 3D scans, such as surveying, then you should go for a precision pro camera. Similarly, if your work requires you to make high-quality and high-accuracy 3D scans supported by a relatively considerable budget, it would be best to choose professional-grade cameras.

Moreover, if you are just venturing into the 3D virtual tours space, entry-level 360º cameras are your best bet. The list below summarizes the options available for each tier. Finally, you can simply use your mobile phone if you are a hobbyist, virtual tours enthusiast, or homeowner without an elaborate budget to purchase a 360º camera.

Matterport is a technology company focused on providing software, hardware, and spatial data solutions. Its hardware offerings include professional-grade cameras, Matterport Pro1 and Pro2, and a motorized mount for mobile phone users. The company’s software platform also supports third-party 360º cameras, expanding the options available to customers. In this Matterport camera comparison article, we have detailed each camera’s capability. Finally, we have the question, what camera should you choose from a selection that includes your mobile phone camera, Insta360 ONE X2, Insta360 ONE R, Insta360 ONE RS, Ricoh Theta Z1, Ricoh Theta SC2, Matterport Pro1, Pro2, and Leica BLK360.

How Much Does Matterport Cost? Pricing Explained | Scan2CAD
Matterport Capture Basics | Getting Started