Manufacturing is broad and, with the evolution and increased use of technology, it has grown even more sophisticated. It now includes the use of computer-aided manufacturing (CAM) software and computer-aided design (CAD) software packed with numerous features to ease the process of creating 3D and 2D models, as well as computer-aided engineering (CAE) software that simulate various conditions and their impact on the design/model.

However, while it may be obvious that CAM software translates designs generated by CAD software into instructions for the machines, the answers to the following two questions may not be in plain sight: What makes up these instructions? How can you use the CAM software without necessarily having to create designs using CAD software?

The answers to the questions are G-code and G-code converter, respectively. This article is intended to explore these answers, thereby providing more clarity on what may not be outrightly clear.

As a manufacturing process, Computer Numerical Control (CNC) machining entails the use of pre-programmed computer software, better known as CAM software, which defines how the tools and machinery move. The use of this software makes it a more superior process offering numerous advantages compared to manual controls, where human operators issue commands through buttons, wheels, and levers.

The ability of a CNC system to execute machining instructions stems from the use of a programming language known as G-code.

First developed at the Massachusetts Institute of Technology (MIT) in the mid-20th century, the G-code is any code that tells the CNC machining tool the type of action to undertake. Such actions could include offsetting cuts, switching coordinate systems,  rapid movements (perhaps in between cuts), and controlled movements that result in arced or straight cuts.

It is, however, important to note that G-code is output from CAM software but not a programming language used to create such software. The output, packaged as a program, is stored using one of the many G-code file formats. As there are disparate brands of CAM software written by distinct developers and companies, the output (G-code program) is usually different, hence the existence of multiple G-code file extensions.

Even so, the basic principle holds true regardless of the underlying brand-based differences – that as an output, G-code only contains instructions needed to aid the functionality of CNC machines.

How to Create a G-code Program

To create G-code, CNC machinists can:

This article will mainly explore the third option. Specifically, we will discuss how you can use Scan2CAD, a world-leading conversion software product, and formidable G-code converter, to convert an image to G-code.

While you can eventually convert a wide range of file formats to G-code, the process may not be as straightforward as it sounds. This is because, for some formats, you need to follow several steps, which cumulatively require patience and take plenty of time. This is especially so for raster file formats such as TIFF, JPEG, BMP, and PNG.

Nonetheless, if you do not have the patience and time required to convert such formats to G-code, you have two options:

You may opt to take a different approach by using online tools to convert either vector or raster file formats to G-code. But, as we usually warn our readers, this is an extremely unreliable and potentially dangerous alternative.

Firstly, the converters could lead to privacy breaches, especially when dealing with sensitive files, as they prompt you to upload files to their server. Moreover, they offer limited conversion capabilities, have a limit on the file size you can upload, plus they may output a format that may not work with your CAM software.

The limitations detailed above mean that Scan2CAD is the best G-code converter and overall conversion software. And we can back this statement up.

As a versatile conversion software, the idea behind Scan2CAD’s functionality is to simplify your engineering and design work. We understand that designs can be stored in both raster and vector file formats.

With raster file formats presenting the highest level of difficulty when it comes to converting them to file types regularly used in engineering and design, including DXF, DWG, and G-code file types, Scan2CAD provides advantages and features unavailable anywhere else in the market that ease this conversion. At the same time, Scan2CAD also supports the conversion of PDFs containing vector objects to DXF, DWG, and G-code file extensions.

Having covered some of these capabilities before, it is time to now deal with how you can use Scan2CAD as a G-code converter to convert an image (TIFF, JPEG, BMP, and PNG) to G-code.

At the heart of Scan2CAD’s ability to convert images to G-code is vectorization. This G-code converter automatically detects lines, curves, and shapes, traces them, and then converts them into vector entities, which the software then converts to G-code once you opt to save the file as such. Here’s how you can go about the whole process.

How to Convert an Image to G-Code Using Scan2CAD

Video tutorial: How to Convert Image to G-Code

With Scan2CAD, you can convert an image of a logo or drawing. However, for the best results, the image should be clear, clean, and have a high resolution. Also, try to use images with as few colors as possible and use Scan2CAD’s tools to clean the image (if you do not have a clean image from the onset). 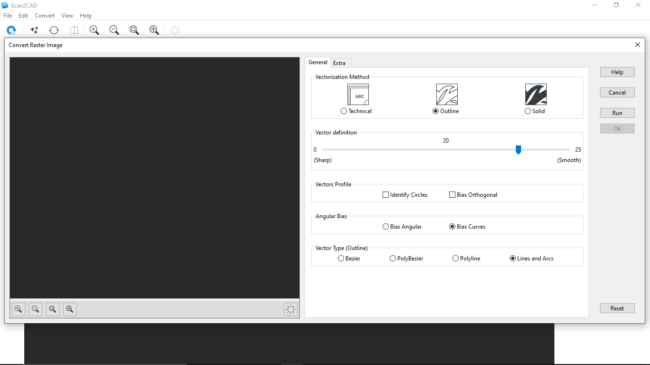 4. Optimize the converted vector image for CNC by clicking the Convert vector image button. On the resultant Convert Vector Image window, click CNC Smoothing and then click Run. At this point, the Scan2CAD G-code converter will generate a preview of an improved vector drawing. The software allows you to toggle highlight vectors, thus allowing you to easily identify the changes made through optimization.

5. If the vector objects still require tweaking, for instance, if the Scan2CAD G-code converter converted arcs as continuous curves and not a collection of individual polylines, click Optimize vectors on the Convert Vector Image window and then check the Arc box. Click Run.

6. Click Export to save the vector to file. Notably, the Scan2CAD G-code converter supports three G-code file types, namely .CNC, .TAP, and .NC. In this regard, select the appropriate file type based on what your CNC machine supports, create a file name, and then click Save.

Before exporting the image as a G-code program, it is crucial to take some time to study the converted drawing. This is an essential step if you are to avoid wasting material, as well as if you wish to have an aesthetically pleasing and accurately machined product that is as close to the original image as possible. To do this, follow these tips: 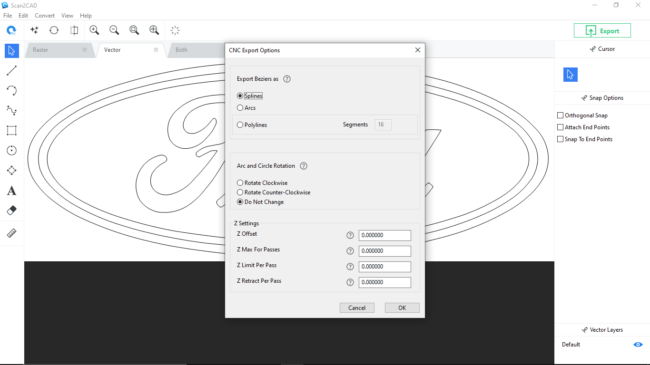 Given the many benefits of Scan2CAD, this versatile conversion tool, which is also a reliable G-code converter, should be your go-to conversion. This applies to instances where you need a tool that seamlessly converts images to G-code, DXF, or DWG file formats. Also, Scan2CAD accepts PDFs containing either raster-based or vector-based objects. It has an unmatched array of tools and features, which ease the conversion process, thus making it the ultimate G-code converter in the market.

As a registered civil engineer with a strong penchant for technology and new tech trends, it is my pleasure and joy to share my tech and CAD/CAM software knowledge and experience.
View all posts by Kevin →
BricsCAD vs Revit: CAD Software Compared
How Much Does a CNC Machine Cost?