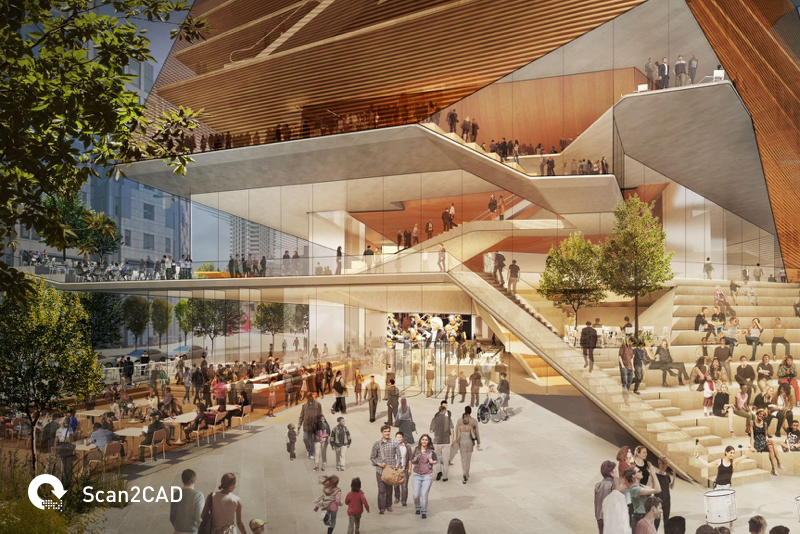 Welcome to Scan2CAD’s news roundup for the month of February! In this edition we will take a look at several big stories in the areas of architecture, design, engineering, and technology, including major announcements about the soon-to-be-built London Centre for Music, the launch of self-lacing shoes from athletic giant Nike, and how an MIT software reverse engineers CAD models to individual and customizable shapes. Additional stories such as AMA’s analysis of the CAD market are also included in this post, so let’s dive right in!

A 2000-seat London concert hall for the London Symphony Orchestra is being planned, and the first designs for the £288M centre for music have been released. The new concert hall will be built on the current site of the Museum of London, and the concept incorporates a pedestrian plaza and foyer, four levels of commercial space, a restaurant, and a smaller venue on the top floor for other musical performances, with a view overlooking St. Paul’s Cathedral.

The massive project will be funded from private donations, according to Sir Simon Rattle, the music director of LSO. “This is not something that we are trying to do with public money, this is something we are attempting to do ourselves and we are trying to make a difference.”

American architect Liz Diller, who is best known for her work on New York’s High Line, designed the wooden  concert hall with inspiration from geological formations of layered strata. Every seat in the hall will have an optimum view of the stage, and there will even be breakout areas within the audience where musicians can also perform.

The London Centre for Music is being touted as a “concert hall for the 21st century” inside a pyramid-shaped tower. It will also feature an outdoor stairway doubling as an ampitheatre and linking the hall to the Barbican highwalk network. “A vital public space seamlessly connects to the foyer and extends a welcome to everyone, with or without a performance ticket,” Diller said.

Diller added that the venue will have various activities throughout the day and can accommodate beyond just the LSO. “We imagine a concert hall for the 21st century that embraces both a bespoke and a loose fit approach: tailored for exceptional symphonic sound, yet agile enough to accommodate creative work across disciplines and genres.”

Nike’s decades-long dream of creating a self-lacing pair of athletic sneakers that can adapt to the wearer’s feet is finally a reality. The Adapt BB, which is a Bluetooth-enabled smart shoe, is designed to detect blood pressure and loosen automatically.

The Adapt BB does that exactly: adapt to what the wearer is doing and figure out what you want to do. “That is the broader vision, or the biggest dream, that the product becomes so synergistic to your body. It just knows almost kind of what you’re thinking,” explains Eric Avar, VP and creative director at Nike Innovation. “It’s a natural extension of your body.”

Through a paired app on the wearer’s phone, the Adapt BB will remember your preferred settings and how tight or loose you like to wear the shoe in various situations, such as warm-ups, games, and when taking a break.

This is not the first time that Nike has attempted self-lacing shoes. In 2016, the manufacturer unveiled the HyperAdapt 1.0 at a cost of $720. The shoes were bulkier and only released on a limited run. Another iteration, the high-top Mags, were also sold in limited quantities that same year.

The Adapt BB is a completely different design, as it does away with any lace whatsoever. Instead, wearers use Bluetooth to tighten or loosen their shoes right from their phones. Two popular NBA players, Jayson Tatum and Luka Doncic, will be the first athletes to don the sneakers.

The Adapt BB officially went on sale on February 17 in Nike stores and online, as well as through the SNKRS app. The cost is $350.

Researchers from the Massachusetts Institute of Technology (MIT) have devised a software that makes use of the ‘program synthesis’ technique. This system breaks down CAD models into their original and individual shapes, including circles or cubes. The technique reverses the process by disassembling the CAD model into editable shapes, analyzing them individually, and then figuring out how the shapes were assembled into the final CAD model.

This is opposite to the constructive solid geometry (CSG) tehnique which is more widely used in creating CAD models. CSG utilizes basic shapes and adjustble parameters to assemble single objects, utilizing a mesh of 3D triangles to define the final shape. However, this process involves more work and takes more time. Also, converting triangle meshes back into shapes typically produce results that do not scale well to more complicated models, and accuracy is compromised in low-resolution files.

MIT researchers built a dataset of 50 3D CAD models that had different complexities and used this in experiments to reverse engineer CAD files made of up to 100 basic shapes. “At a high level, the problem is reverse engineering a triangle mesh into a simple tree,” according to Tao Du, a PhD student of MIT’s Computer Science and Artificial Intelligence Laboratory (CSAIL) and part of the Computational Fabrication group behind the project.

“Ideally, if you want to customise an object, it would be best to have access to the original shapes — what their dimensions are and how they’re combined. But once you combine everything into a triangle mesh, you have nothing but a list of triangles to work with, and that information is lost. Once we recover the metadata, it’s easier for other people to modify designs,” Du explained, adding that this process could be especially helpful for manufacturing or 3D printing.

The findings of the group’s research were debuted during the SIGGRAPH Asia 2018, a computer graphics and interactive technology exhibition which was held in December.

Meanwhile, here are some other interesting stories on architecture, design, engineering, and CAD that caught our attention over the last month:

How to Convert an Image to AutoCAD
Bonjour, Galois! What’s new in 10.1.0