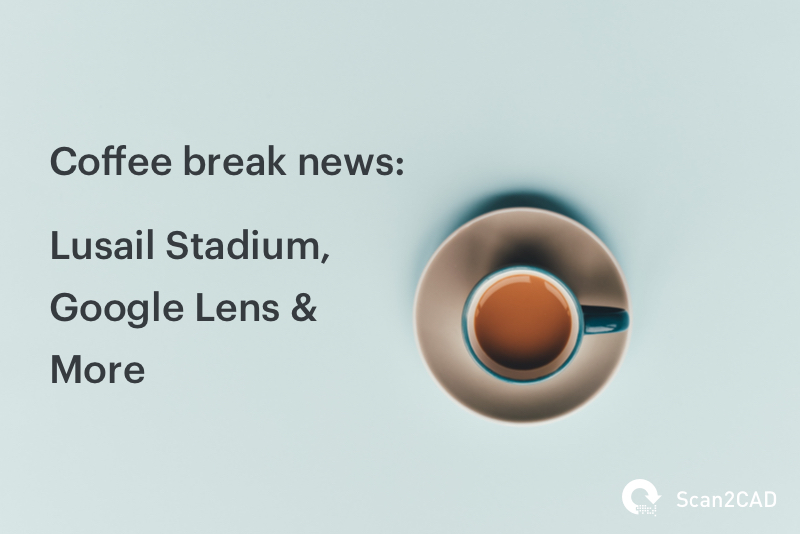 Welcome to Scan2CAD’s final news roundup of the year! As we approach the New Year’s festivities, it’s time to take a look back at what the last month of 2018 had to offer us. This month’s roundup features new designs from Foster + Partners and Renzo Piano, alongside an improved laptop from Samsung and a big announcement from Google. Let’s dive in!

It’s only a few months since this summer’s FIFA World Cup took place in Russia. If you’re a soccer fan, the wait until the next tournament in 2022 may seem interminable—especially given the shift in timetable from summer to winter to adapt to the extreme temperatures in the host nation, Qatar. Nonetheless, that wait seemed just that little bit shorter this month, as architecture firm Foster + Partners revealed the new concept for the Lusail Stadium.

For the unfamiliar, the stadium will play host to the opening and final matches of the 2022 World Cup. Progress actually began on the construction of the stadium in the spring of 2017. It’s not been until now, however, that the organizing team have unveiled such a wealth of detail about the design.

The striking, golden design certainly lives up to the building’s name: Lusail Iconic Stadium. However, Foster + Partners have made clear that it will be no white elephant. After the final whistle, the building will become a community centre, with housing, a school and a health clinic. Don’t worry, though, sports fans—the owners will retain a community football pitch on site, too.

If you’ve followed our blog recently, you’ll notice that we’ve taken a keen interest in object recognition. After all, it’s an invaluable tool in the conversion of raster images to vector images, such as from PDF to DWG. While Scan2CAD focuses on sorting objects in a raster image into lines, arcs, circles, and so on, Google has gone a step further in aiming to sort… well, the entire world.

That’s the foundation behind Google Lens, which effectively allows you to search the internet using your camera and whatever’s around you. Not quite sure what kind of apple you’re buying at the store? Hold it up to the lens and let Google tell you. Want to know what that sign says when you’re holidaying abroad? Translate it in a second. You get the idea.

Google Lens has been around for a little while, but this month brought with it a big milestone. That’s because Google Lens is now capable of recognizing one billion different items—no mean feat! In fact, that figure only represents the number of items available to buy via Google Shopping; the software can also recognize a wide variety of non-purchasable items, such as 2D shapes and human faces.

Lens is now available on both Android and iOS, as well as being one of the flagship features of the Google Pixel 3 and 3 XL phones. Head to the Google Lens blog to learn more about how far the software has come.

One of the most tragic news stories this year was the collapse of the Ponte Morandi bridge in Genoa, Italy, which resulted in the loss of 43 lives. Rebuilding after the disaster, the city turned to one of its most famous sons: architect Renzo Piano, famous for designing Paris’ Centre Georges Pompidou and The Shard in London.

This month, Piano unveiled his design for a bridge that will “last for a thousand years”. In a nod to the city’s maritime heritage, he noted that the streamlined, white design will “have elements of a boat”.

Piano completed the work for free out of a sense of “civic spirit”; estimates for the construction cost come in at €202 million. “It will be… a very Genoese bridge”, Piano said. “Simple but not trivial. A steel bridge, safe and durable. Because bridges do not have to collapse.”

If, like many designers, you like the flexibility offered by 2-in-1 notebooks, you’ll love the news coming from Samsung this month. That’s because the South Korean tech giants have announced a new, 15″ version of their Notebook 9 Pen laptop—alongside some other nifty improvements.

A 15″ version of the standard Notebook 9 laptop was already available. However, this is the first time that the convertible Pen version will get an upgrade to the larger size. And it’s come at exactly the right time, as Samsung have also announced that the S Pen itself is now even better. With improved latency and replaceable tips, drawing with the S Pen just got faster and more customizable.

Additional new features with the Notebook 9 Pen include extra Thunderbolt ports and new eighth generation Intel processors. Check it out at the Samsung Newsroom.

More stories we loved this month

It’s almost time for us to bid you farewell for 2018—but not before we take a minute to highlight some of the articles we loved from around the world of CAD (and beyond).