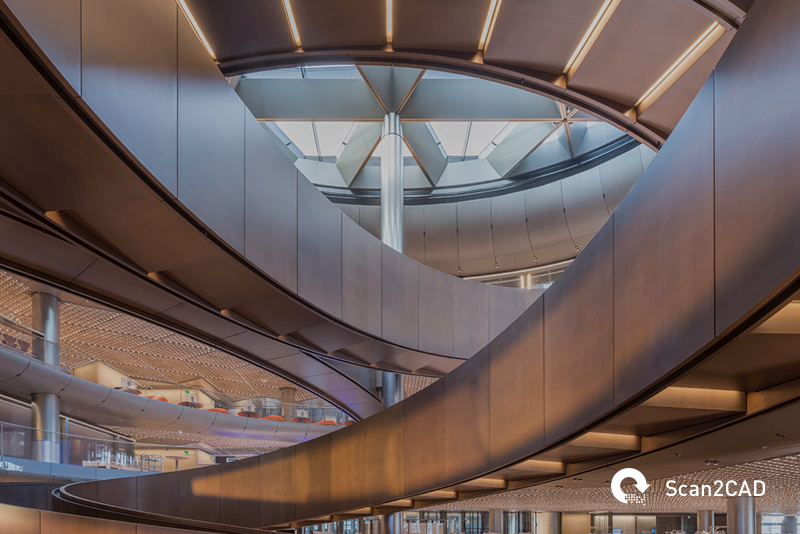 Want to read up on some of the most interesting stories from the fields of architecture, design, engineering and CAD? Here’s a selection of some of the things we’ve loved this month. We’ve highlighted the winner of the RIBA Stirling Prize, taken a look at the new MacBook Air, tried on an interesting pair of glasses, braved the SolidWorks volcano, and put on an architecture-inspired mask.

And the winner is…

Each October sees the Royal Institute of British Architects (RIBA) award the Stirling Prize, one of the U.K.’s premier architecture awards. This year’s diverse shortlist included the new Tate St Ives art gallery, student accommodation in London and even a cemetery. In the end, though, it was the Bloomberg Building in London which took home the prize for firm Foster + Partners.

The winning studio have tasted Stirling Prize victory before, having previously won for the Imperial War Museum Duxford and 30 St Mary Axe—more commonly known as The Gherkin. In awarding them the prize once more, the judges described the building as a “once-in-a-generation project which has pushed the boundaries of research and innovation in architecture”. High praise indeed. To see it for yourself, just check out the video above.

Apple’s MacBook series of laptops have long been a favorite of the design community. That’s why our interest was piqued by rumors which suggested the company would announce a major update to the models in an October 30 event in Brooklyn.

It didn’t disappoint. During the event, Apple CEO Tim Cook showed off a revamped MacBook Air. The first major update since 2015 saw the model adopting features its bigger brothers have already pioneered: a Touch ID fingerprint scanner, a new keyboard, and a Force Touch trackpad. More importantly, the model looks and feels different, with a Retina Display screen and body made from 100% recycled aluminum. It’s this latter update that has seen the model dubbed the “greenest ever”.

If you’re a spectacle-wearer, you’ll likely face a choice between metal and plastic frames when buying a new pair. The debris accumulated at the bottom of the Thames is, it’s safe to say, a less popular option. Nevertheless, that’s exactly what London-based glasses makers Cubitts have used to create a bespoke pair of glasses titled ‘A Frame for London’.

The choice of medium may be a little outré, but, as Cubitts founder Tom Broughton notes, there’s a reason for it. “The oldest pair of spectacles ever found in London dates back to 1430”, he explains—and they were discovered in Thames mud.

Inspired by the find, Cubitts set out to do some dredging of their own. In the course of their ‘mudlarking’, the company came across items as diverse as a boar’s tusk and Victorian marble. Satisfied with what they uncovered, they used the materials to create a unique frame representative of the capital’s history.

You can see how the finished pair came together in the video above. The result is more aesthetically-pleasing than you might think—though don’t expect to see them hit shelves near you any time soon.

If you thought the release of SolidWorks 2019 was all Dassault Systèmes had to offer, you may have another think coming. That’s because SolidWorks head Gian Paolo Bassi, in an interview with engineering.com, claimed that “a major breakthrough is coming” with regards to the company’s 3DEXPERIENCE platform.

In perhaps some of the most colorful language ever used in a CAD interview, Bassi claimed that:

The volcano of 3DEXPERIENCE for SolidWorks has been boiling for some time now, and I feel like an eruption is imminent. You’ll see fireworks!

There certainly is a lot to get excited about over at Dassault, with the new release of SolidWorks incorporating exciting AR/VR features and improved performance when dealing with large and complex assemblies.

All of this feeds into a change from ‘CAD as a commodity’ to an era where CAD exists interdependently with modern PLM and PIP software. To read the full, illuminating interview, head to Engineering.com.

A different type of model on the catwalk

Any architecture student will be more than familiar with the blue styrofoam used to create models. In fact, given the field’s demanding workload, you might be a little too familiar with it. In a mid-all-nighter-near-breakdown moment, you might even have been tempted to scream out in frustration and smash your head down into your half-finished model. This, we can only assume, was the starting point for Siba Sahabi’s Persona collection, which seemingly turns architectural models into masks.

We must note here that, while the masks she’s created look like the blue foam we know and (sort of) love, they’re actually made from balsa wood, another favored material of the architectural community. Each part is cut using a CNC machine, before being assembled in stepped layers to form intriguing designs.

In creating the collection, Sahabi aimed to examine what she calls the ‘era of the face’. Persona, she describes, is “the social face the individual presented to the world”. The masks also take their cues from the ‘curated reality’ of social media, with some revealing very little of the wearer’s real face.

To find out more about this collection, and the artist herself, visit Siba Sahabi’s website.