Welcome to World of CAD, Scan2CAD’s monthly roundup of CAD-related news. This month, we’ll start by focusing on XTract3D, the SolidWorks add-in aiming to make reverse engineering simple and affordable. Next, we’ll take a look at the XPlotter, a new CNC machine that combines plotting and laser capabilities.

This month’s edition also features the new series of 3D printers from giants Stratasys, as well as the new features in Mastercam 2017 Lathe. Finally, we’ll be taking a look at one of the coolest maker projects we’ve seen—turning a 3D printer into a CNC mill. Read on for the full details!

Many of our users are looking to reverse engineer a part from a scan—but this process can be tricky and costly. One company aiming to change that is Canadian software firm Polyga. In January, Polyga launched their first product: XTract3D, an add-in for SolidWorks. The toolbar gives users powerful tools to perform reverse engineering and mesh processing. XTract3D makes it simple and intuitive to create CAD models, and is suitable for a wide range of design applications.

In creating XTract3D, Polyga “examined the entire reverse engineering workflow and reduced it down to its purest form.” The add-in aims to mirror the conceptual and design processes of creating a new CAD part, making it intuitive to use. XTract3D also gives users control over how they create models. Users have the option to reverse engineer the entire part, or simply to use it as a reference point for building new parts.

Users wishing to purchase XTract3D can make use of perpetual and subscription options. For short-term users, it costs $499 to rent the software for 30 days. Meanwhile, a lifetime license for a single user comes in at $2,999. For more detailed information, check out the Polyga website.

In late January, PineconeRobotics launched one of the most exciting Kickstarter projects of 2017 so far: XPlotter. This versatile CNC machine functions as a desktop plotter, but also integrates laser capabilities, as well as a built-in vacuum pump system. This gives users the chance to write, draw, cut, engrave, and even pick and place.

XPlotter’s pen holder aims to simulate the actions of handwriting and drawing. The end result is that the machine is able to create art that looks handmade—with clean lines and no stains. This makes XPlotter a perfect choice for creating cards, invitations, and posters, alongside many other artistic applications.

Laser engraving and cutting is possible using a wide range of materials, including paper, leather, and fabric. It’s even possible to engrave aluminum, making XPlotter a perfect tool for personalization. To see exactly what XPlotter can do, just watch the video below, or check out the Kickstarter page.

Last month, we covered the build-up to one of the biggest events in the CAD calendar: SolidWorks World 2017. Now, the conference is well underway—and it’s become the venue for some great new product launches. Some of the most exciting come courtesy of 3D printing behemoths Stratasys.

The firm unveiled three new models of 3D printers: the F170, F270 and F370. Together, they form the F123 Series—a group of machines designed to increase productivity and make rapid prototyping truly rapid. The series also enables users to use a single machine for all stages of the prototyping workflow. This helps businesses to save time and money, whilst maintaining standards for product quality.

Stratasys designed the series with office and classroom environments in mind, with the company promoting the machine’s ease of use. In fact, Stratasys intends the machines to be accessible enough that even users with no previous 3D printing experience can use them. Despite this, they maintain the same high standards and specifications that we’ve come to expect from Stratasys’ printers. Learn more about the series in the video below.

Moving from hardware to software, this month also saw the release of Mastercam 2017 Lathe from CNC Software. As the “most widely used CAM software worldwide”, Mastercam offers solutions for many varieties of CNC machine. Their new edition of Mastercam Lathe promises to be the most powerful yet, including a wide range of new features. 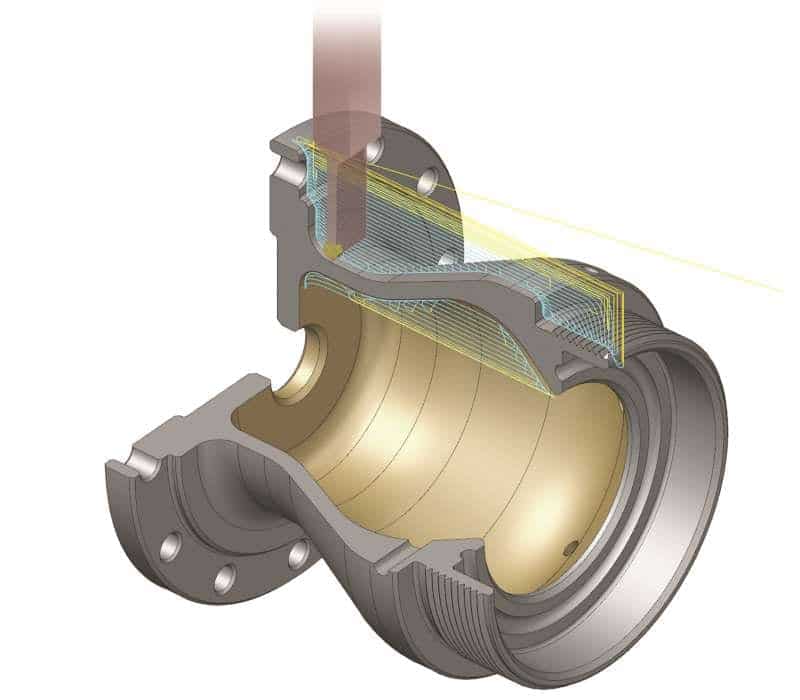 Building a CNC mill from a 3D printer

Too often, we tend to think of CNC and 3D printing as opposites. In some respects, that’s true: CNC is a subtractive process, meaning that material is removed, whilst 3D printing is additive, with models being slowly built up over time using extruded material. However, the two technologies share a similar basis. Both essentially involve tools operating alongside X, Y and Z axes, following computer-generated directions. As such, it’s possible to convert one machine into the other.

Turning a CNC mill into a 3D printer is one thing—Hackaday describes the process as “almost trivial”. However, converting a 3D printer into a CNC mill is much trickier. Nonetheless, Thomas Sanladerer decided to do just that.

Using a MendelMax3 as the base machine, Sanladerer’s motivation for the conversion was primarily educational. Though he wasn’t sure that his machine would be practical, it ended up performing much better than expected. The converted mill is capable of milling wood, acrylic, and even aluminum—though with slower speeds and a lower cutting depth.

The process is not for the faint-hearted. Firstly, the conversion required a sturdier-than-average printer—and even then, Sanladerer intended to replace the nuts with new, printed equivalents. He also had problems with the initial machining tool, which failed after several uses. However, the new version of the machine proves that the conversion is possible—and produces a working machine. Check out the video below to see it in action.

How Is CAD Impacting on the Fashion Industry?
CAD Salaries – Everything You Need To Know