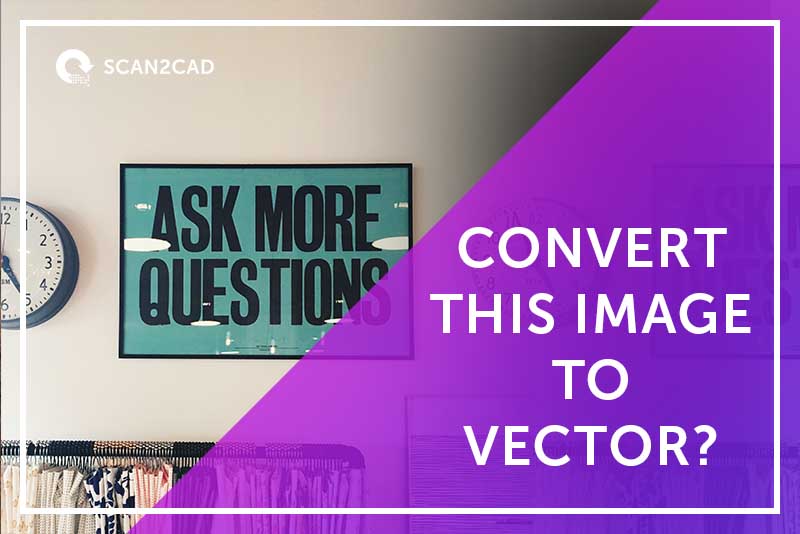 Sometimes, people have unrealistic expectations of what automatic file conversion software can achieve. Yes, this clever software can create a vector image within 5 seconds. However, it’s important to remember this raster-to-vector conversion mantra: garbage in, garbage out. If the main elements of an image are obstructed, you can’t expect the software to imagine what it should look like! It can’t work miracles on a poor quality image with fuzzy lines either. If you can’t read the text in the photo, the software can’t too. In this post, we considered a few examples of poor images that are not suitable for raster-to-vector conversion, and compared them against great candidates you should choose instead. We’ve also added in some tips on how to improve raster images.

Can I convert this scanned technical drawing to vector? 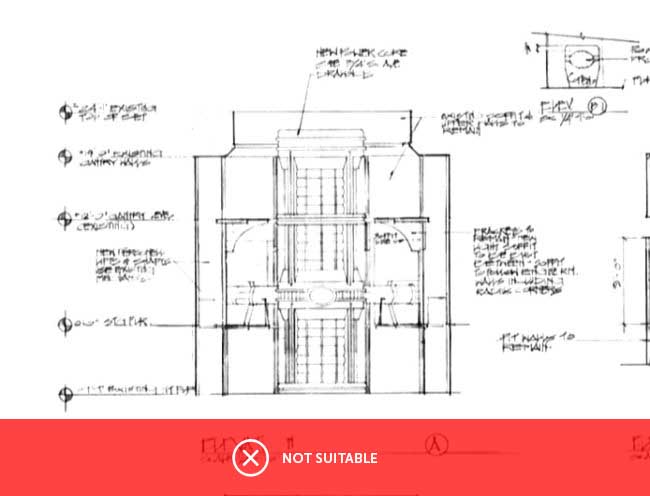 Nope, not this one! It is common for folks to scan a floorplan or technical drawing and convert it to vector, so that the drawing can be used in another CAD application (such as AutoCAD). However, you cannot achieve that with this image above. First, it’s a very poor quality JPG file – zoom in and you’ll get a blurry, distorted mess of pixels. Lots of data would also have been lost when the JPG file is saved, as JPG uses file compression to minimize the file size. Secondly, the image holds up to 16.7 million colors. Ideally, it would be just black and white. If there are too many colors (such as many shades of gray), vectorization software would pick out different zones of colors as different vector elements. Finally, the text is completely unreadable, even to the human eye. The Optical Character Recognition (OCR) software would find it almost impossible to read and retype this into vector text. 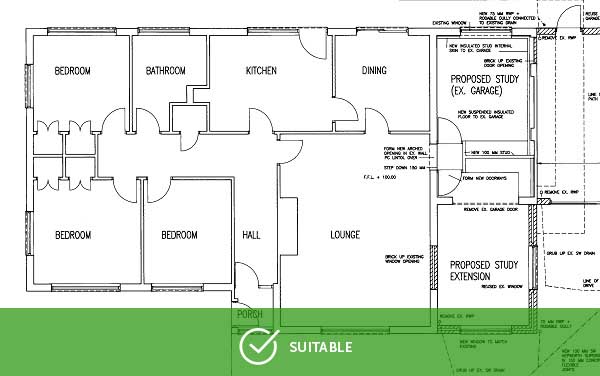 Meanwhile, this floorplan would be converted to vector without a hitch!

Instead, you need to use a technical drawing that looks like this one. This floor plan that is perfect for vector conversion.

Can I convert this photo for 3D CAD use? 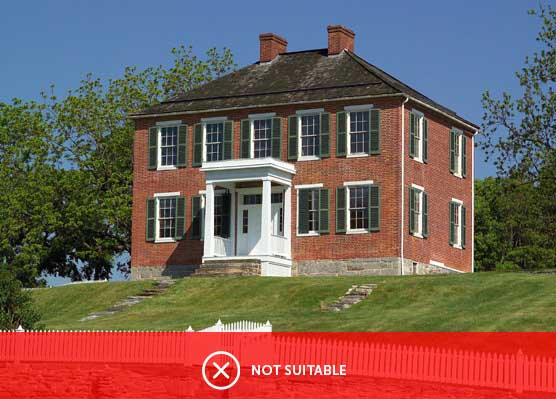 Don’t bother trying to scan a photo of a house to create 3D vector plans of the building. It is simply not possible; no one can write software to achieve that—ever! Consider all the information that is missing – one cannot tell the scale of the house from the photo without making some assumptions, and the image doesn’t reveal the part of the house that faces away from the photographer. A more realistic option is to work with a skilled designer to create a 3D vector plan, using the photo as inspiration. There are also 3D scanners that can be used to construct 3D models, but this doesn’t sit in the realm of raster-to-vector conversion.

Can I trace the outlines of shapes from photos?

Check out the image above, on the left. Automatic vectorization software cannot trace clean outlines of these individual flowers—the image is simply too busy. If you’re looking to achieve this, your best bet may be to manually trace the image—for example, by using the Pen tool in Scan2CAD.

A better option could be to find an image of a single flower, with no overlap, such as the image in the middle above. Using such an image, you could then increase the threshold until you remove any unnecessary detail, leaving you with a usable outline.

The ideal candidate would be the image on the right. As it is a silhouette, made up of only two colors, with no distortion, it’s perfect for vectorization.

If you’re looking to create a more photo-realistic vector image, rather than an outline, then this is possible with Scan2CAD. We opened the original image, seen below on the left, in Scan2CAD, and reduced the number of colors in order to create an image with solid regions of color. We then created a simpler vector image from the original.

Using Scan2CAD, you can alter a number of settings during the vectorization process, such as vector definition, profile and types. You can see the effect of changing each setting in the Live Preview window which appears in your dialog box. Learn more about vectorizing pictures and photos in our User Manual.

Can I convert these logos into vector format?

It is best to use the clean logo file on the right, instead of a photo of the logo against a full background (left). Do note, however, that the logo on the right needs some cleaning. The image looks great viewed at this scale, but when you zoom in a little closer, you’ll notice some blurred lines and distortion. We recommend using Scan2CAD’s Color Segment tool to reduce the colors.

Can I reverse-engineer these tools from a scan?

Image source: Into The Woods blog and Alloy Artifacts

You will not yield an accurate vector outline of the tool from the image on the left. There are two main problems. First, the photo was not taken directly above the tool, therefore the different aspects of the tool are not shown in the correct scale. Secondly, the image does not have a clear contrast between the tool and the background. You should try scanning or photographing the tool on a clean, white background. As an extra tip, try your best to minimize the shadows in the photo.

The photo on the right gets extra credit because they included a ruler as reference of measurement. Another tip could be to scan the tool with a piece of graph paper in the background. We’ve also written a step-by-step guide on How to Reverse Engineer a Part from a 2D Scan.

We hope that this post has shed some light on what conversion software can do, and what it can’t. Here are some resources that you might find handy:

Scan2CAD is the market-leading vectorization software, and comes complete with a full raster and vector editing suite. Plus, a blog covering all the latest news—from Top 3D CAD models to CNC Projects to CAD Freeware. You can try out all of Scan2CAD’s features for yourself, with our 14-day free trial.

Ultimate Guide: GIF-to-DXF Conversion
Why You Should Avoid Cracked Copies of Scan2CAD