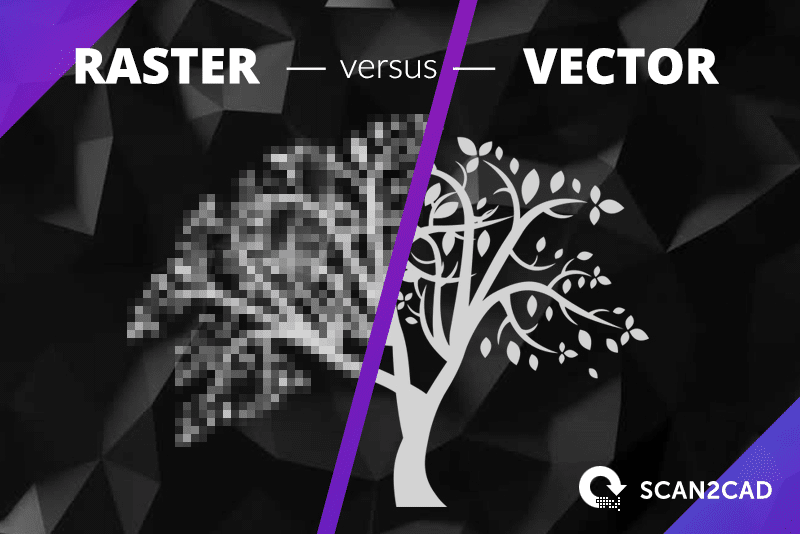 There are two types of computer graphics: raster images and vector images. Whilst they perform similar roles, the way that they work is completely different. Whether you’re a computer graphics expert or a complete newcomer, there’s always more to learn about rasters and vectors. What are they? When should they be used? This guide will explain it all.

Raster images are commonly used for photographs, and most of the images you see on your computer are stored in a raster graphics format. You no doubt use them on a regular basis – for example, when you share a GIF.

Related: What is an animated gif?

Raster images are made up of (up to) millions of  pixels. There is no structure to a raster image, meaning that every pixel is essentially a separate, tiny block of color. As a result, when you change the size of a raster image, there is no way of making it work as a whole. Zooming into or enlarging a raster image simply means you make all the individual pixels within the image bigger. 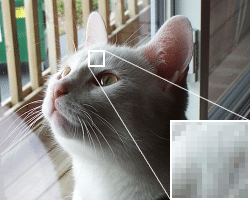 As you may expect, scaling up (or stretching) a raster image means it loses quality. Take, for example, the image of a cat on the right. When you zoom in, the separate squares of color become obvious, and the image looks blurry and undefined. This is because a raster image is resolution dependent, and needs to be at the right scale to appear correctly.

Pixels (short for picture elements) are the smallest elements of a raster image. Each pixel is an individual square of color. However, different image files have different pixel density. Pixel density is simply a measure of how many pixels are in a given area. If a 100 × 100 pixel image fit within a 1 inch square, for example, the pixel density would be 100 pixels per inch (also referred to as ‘DPI’, meaning Dots Per Inch.) If your pixel density were too low, then your image would be low in quality.

Pixel density is determined by the device that created the image – either a physical device, like a scanner or camera, or by graphics software. It’s also possible to use programs like Photoshop to increase the PPI of an image.

Typically, higher quality will result in a wider range of color palettes and a bigger overall file size.

Bonus: What is the recommended DPI when converting an image to vector?

We recommend starting with an image which has as few colors as possible (black and white is great.) The image should be at least 300 DPI and be in a lossless format (explained next.)

In order to reduce an image’s file size for storage, people make use of compression. There are two main types: lossy and lossless.

So, which raster format should you use? It depends on your needs. If you want to exchange images (especially photos), and need the file size to be small, then JPEGs are perfect. For animations, you should choose GIF. If you want to vectorize your image, however, you should consider TIFF or PNG. For more information, take a look at our infographic.

Please note that this list of raster formats is not exhaustive. There are other lesser-known raster file types out there, we have just listed the most popular ones.

tor images are mathematically ‘perfect’ formats. They are most popular in graphic design and engineering. They are much easier to edit than raster images, and do not suffer from loss of quality.

Remember the issue of resolution dependency in raster images? That isn’t an issue for vector images. Unlike raster images, they are made up of paths not pixels. Instead of separate blocks of color, vector images rely on mathematical coordinates.

This means that no matter how much you alter the scaling of a vector, it won’t lose quality. Whether it’s a tiny logo on a business card, or enlarged to the size of a billboard poster, the image will appear exactly as intended.

An outline of a tree in vector SVG format (Click here to view larger scale.)

Unlike raster images, vectors aren’t dependent on pixels. Instead, they rely on pure math. If you increase the size of a vector image, then the paths increase in size too. This means that when you scale up a vector image, the lines multiply in size.

For example, if you doubled the size of a 10cm line, the entire line would be scaled up as a whole, creating a 20cm line. In a comparable raster image, meanwhile, each pixel that makes up this line would be individually scaled up. Being able to change the scale of an entire object means that its quality stays the same. The image, therefore, is infinitely scalable.

Whilst there are many advantages to vector images, they are unsuitable for some uses. Creating a photo-realistic vector image, for example, is possible, but not advised. This is because vector images do not support the kind of color blends possible in raster images.

The nature of vector images makes them most suitable for images with few colors. This includes architectural drafts and engineering drawings, in addition to logos, which normally require a limited color palette.

As with raster images, there are a wide range of vector formats to choose from. Some are generic, whilst some are more software-specific. Some of the most common formats include:

Which format you choose depends on your needs and software. To exchange images, PDFs are often the most suitable choice. However, they don’t allow for edits. For CAD users, formats like DXF and DWG are best. Users of Scan2CAD, meanwhile, can choose from 33 different vector and raster file types.

It’s clear that no one image type is suitable for all purposes. When choosing an image format, it’s important to take into account the intended purpose of your image and the software you use. For web graphics and photography, raster images are usually the most suitable choice. They’re easy to share and store, and hold a lot of detail. In graphic design, publishing, and technical industries, meanwhile, vectors are best. This is because they are easy to scale, small in size, and won’t lose quality.

Want an easy way to decide the right format for your image? Check out our tables below on the pros and cons of raster and vector images.

You might be reading through this thinking that your raster images might actually be better off saved as vectors. However, it’s not as simple as just saving the image as a different file type. To convert from raster to vector, you’ll need to use image tracing – also known as vectorization.

Vectorization works by tracing over a raster image with vector lines. This can either be a manual or an automatic process. However, manually tracing an image is extremely time-consuming, and it can be hard to get good results. Automatic image tracing, meanwhile, detects lines, curves, shapes, and text within an image. It then traces over the raster image with vector entities. It still requires some work beforehand to make sure your image is optimized for vectorization. However, automatic tracing can shave hours or even days off your workload.

“Hi, everybody, Luke from Scan2CAD here. So in this short video, what I’ll be showing you is the difference between a raster image and a vector image in a visual way, and we will be converting this raster image into vector. So what it looks like we have here is a very clean raster image, and it’s obviously a silhouette of a tree. I say it looks like that because if we zoom in, we can see that there’s a whole load of unwanted pixels here.

Now this collection of speckles is sometimes referred to as noise. This is a JPEG image, and noise is very common with JPEG images. It’s created by the compression used to reduce the file size of JPEG images. They were designed to be small in file size and that compression creates this noise. So JPEG is a lossy file forma, and there’s a lot of other lossy file formats out there. Lossy effectively refers to the fact that you lose quality in the image when it’s compressed, as opposed to lossless file formats, like BMP and TIFF.

So we go to raster effects. Also, I’ll use the threshold tool in Scan2CAD. Now we have a clean black and white image. If I zoom back into those areas you can see there’s no noise there now. Now let’s convert this image to vector. So we’ll go to type, picture photo, click vector, vectorize, and I will just go with a nice clean outline of the image. Now we have vector format.

So, when we compare this to the raster format, if I click and view the raster and go to the vector now, you’ll see that I chose to convert it to a vector outline, we could have chosen a solid vector to make it look like this raster image. But we can edit this vector image now however we may want. For example, we can move lines around, like so, if I just make my selection area a bit bigger.

We can change colors. We could add elements, we could do whatever we want to this image. Of course, because it’s a vector image, it’s infinitely scalable. So we can scale it up and down and it’s… That’s why it’s perfect for anything from sign making, to architectural plans, to engineering drawings.

Additionally, vector lines can hold information which can’t be held in raster images. So now that we’ve got these entities, we can assign different values to them. For example, if we’re working in CNC we could assign a Z value to this, which would tell the CNC machine the depth of the cut. But I’m going to leave it there.

That’s the quick comparison of raster versus vector. If you’re viewing this on the Scan2CAD blog, you’ll see that I’ve inserted this image into the post and I’ve put it in as a SVG format, which stands for Scalable Vector Graphic, which is viewable in most modern web browsers. So feel free to click and view it in larger format and have a play around. I hope that helps and I’ll see you next time.”

If you want to learn more about vectorization or CAD in general, check out Scan2CAD’s blog where you can keep up to date with all the latest tips and advice. Or, take a look at the steps behind vectorization, with Scan2CAD’s user manual.

Keep Your CAD Files Secure With These Simple Tips
History of Scan2CAD: 20 Years in the Making