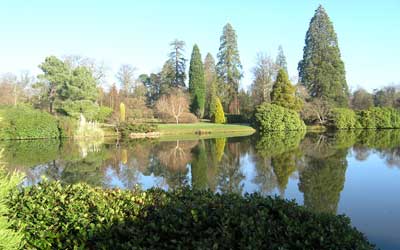 National Trust volunteer steward Michael Bennison has used Scan2CAD raster to vector conversion software to convert historic maps of Sheffield Park, a beautiful and listed English garden, into DXF files which he places on layers over contemporary AutoCAD drawings in order to identify changes made during the past 260 years. Having converted maps of the garden that go back as far as 1745, Bennison said “I have been very impressed by Scan2CAD’s speed, accuracy and ease of use. I shall certainly recommend your Scan2CAD software”.

First mentioned in the Domesday Book of 1086, Sheffield Park has been transformed by a succession of owners from a “field for grazing sheep”, as its name implies, into the landscaped treasure which Britain’s National Trust is preserving today. It is a spectacular historic English garden that boasts dramatic shows of daffodils and bluebells in spring and rhododendrons and azaleas in early summer. Autumn brings stunning colours from many rare trees and shrubs. Winter walks can also be enjoyed in this garden for all seasons.

In the 18th century ‘Capability’ Brown, the acclaimed English master landscape gardener, was commissioned to landscape the garden. By 1885 an ‘arboretum’ consisting of exotic and native trees had been added. In 1910 a new owner continued the massive planting programme, much of which still exists today. During WW2 the house became the headquarters of a Canadian armoured division. Nissan huts were sited in the garden and woods. After the war, like many other large country estates, Sheffield Park was split up and sold in lots. 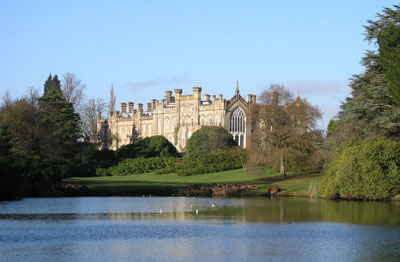 In 1953 the National Trust purchased what remained of the main garden. More recently it has negotiated to purchase what remains of the Home Park. During 2002 the National Trust embarked on the first phase of the garden’s restoration. Ultimately, over 9,000 trees and shrubs will be planted to enrich the garden which was ravaged by the 1987 and 1990 storms.

Much of the ancillary work at National Trust sites is performed by volunteers. Bennison became a volunteer steward at Sheffield Park after retiring as a management consultant 14 years ago. The plant database and park mapping systems, such as they were, were poor so he decided to create his own integrated database / mapping system. He began by scanning and converting four A0 maps of Sheffield Park into CAD format and dividing these into a grid.

At the same time details on almost 3000 plants were captured in a MS Access database. This laborious work was carried out by volunteers and garden staff. Each plant’s location data was taken off the map using a transparent graticule and then added to the database.

Next, Bennison wrote some Access Basic routines to instruct IntelliCAD where to plot a plant symbol with the plant’s Accession/Tag Number on a map of the park. When a plant map of the park is plotted evergreen conifers are shown as triangles, deciduous trees as circles and shrubs as plus signs. Early, middle and late planting is shown in different colours on separate layers. 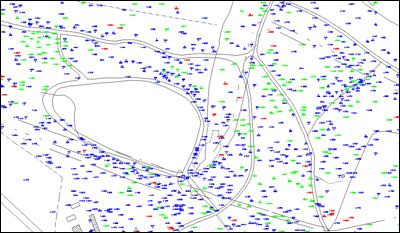 A map of part of Sheffield Park with different plantings plotted in different colors.

“We went through a number of stages to get to the present system which is unique to Sheffield Park” Bennison says. “Many changes and additions have been made to respond to the needs of the Head Gardener. I call the program SP-Base. It is not commercially available but I am happy to explain how it works to anyone who is interested. A competent programmer who understands script files can knock up an interface between Access and IntelliCAD in a morning”.

“But” he warns “capturing the plant data takes time. It’s a long term project”. The details and position of more than 7,000 plants can now be found on SP-Base.

With the current garden on a CAD grid, (soon to be changed to use the Ordnance Survey grid), old maps can now be converted with Scan2CAD raster to vector conversion software and fitted onto the same grid to see, for example, how the layout of the lakes has changed over the years or to rediscover with reasonable accuracy the site of old artefacts, like buildings, walls and drainage ditches.

In the late nineteenth century the Earl of Sheffield staged cricket matches in part of the garden. The first Australian and South African cricket test teams to play in England often began their campaign by playing Lord Sheffield’s Eleven at Sheffield Park. The last match played against Australia at Sheffield Park was attended by the Prince of Wales and over 25,000 spectators. One map shows pavilions and a bandstand which have long since disappeared. By superimposing these on a modern map of Sheffield Park Bennison can see with some accuracy where the pavilions and bandstand were. This area is now being reinstated as a cricket pitch and events area.

“The quality of a lot of the old maps was not that good to begin with. Fortunately, the copies I have been working with had a scale and a direction for north. Scan2CAD has made it possible to convert these to vectors, then scale, rotate and save them as DXF files for export to IntelliCAD where I can compare them directly with the current map. Scan2CAD has saved an enormous amount of time. I would not have contemplated converting all the maps without it”, he says.

I'll be bringing you tips and tricks from the CAD/CNC/GIS world. I enjoy good coffee, great architecture and British weather.
View all posts by Luke →
Scan2CAD in Scanning Services