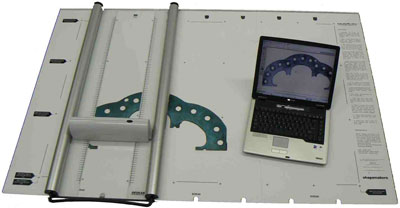 Scan2CAD raster to vector conversion software is the new vectorizing front-end for Deskan FastParts, a reverse engineering CNC solution based on the Deskan scanner.

Scan2CAD raster to vector conversion software is the new vectorizing front-end for Deskan FastParts, a reverse engineering CNC solution based on the Deskan scanner.

Earlier this year we were contacted by Ian Ferrier, managing director of Shapemakers, an Australian sign and CNC company based in Brisbane, Queensland. His company manufactures an A0 large format colour scanning system called the Deskan Color Express 6 which we had first seen in 2001 when we were demonstrating Scan2CAD at the AEC Systems show in Chicago.

The Deskan 6 offers users an affordable and unique way to capture large format scans. It uses an A4 motorised scanner head to capture drawings up to A0 or E-size in strips. Each strip is individually scanned and saved, automatically corrected for distortion and joined by stitching software that recognises special control points. It is slow but cost-effective, less than half the price of an entry-level A0 scanner.

Ferrier has developed a solution based on the Deskan scanner for CNC companies who need to reproduce profiles and shapes fast. “In Australia”, Ferrier said, “people in the business of reverse engineering CNC components seem to like what the Deskan has to offer”.

Deskan FastParts eliminates time consuming hand measuring and redrawing by automatically scanning and converting old gaskets, drawings and seals, etc., into ready-to-cut DXF files in as little as five minutes. Deskan FastParts can scan items like gaskets up to 1180 x 870mm in size and, using a custom built table, up to 200mm thick. It provides CNC operators with an affordable and reliable scan-to-vector solution for reverse engineering parts quickly and cost-effectively into DXF vectors for editing in CAD and or cutting on a CNC machine for accurate reproduction.

Ferrier sees his scanner’s future in scan-to-vector solutions like Deskan Fastparts. But first he needed a raster to vector converter.

“The Deskan doesn’t have a vectorizing feature and I did not want to create one. I wanted to source a well-priced converter that does the job for people with a limited degree of skill and understanding of the vectorizing process. It needed to be foolproof and capable of creating cutting files with a minimum of clean up. We tried bundling the Deskan with other raster to vector converters. All of them were OK but none were outstanding” he said.

As Ferrier had customers with copies of Scan2CAD raster to vector conversion software who spoke highly of it, he evaluated it. “I liked what I saw” he said. After satisfying himself that Softcover gave good technical support on Scan2CAD, Ferrier asked us if we were interested in marrying our software with his Deskan FastParts. What a question! So, we are now pleased to announce that Scan2CAD is the new vectorizing front-end for Deskan FastParts.

“Any business that has to duplicate or reverse engineer CNC parts will find our Deskan Fastparts an asset. It allows users to scan a component up to A0 in size, vectorize the part and cut it out by machine quickly and easily with minimal knowledge of both processes. Combined with Scan2CAD it’s a great scanning system for rapid reverse enginering of CNC parts, one we plan to market aggressively” said Ferrier.

I'll be bringing you tips and tricks from the CAD/CNC/GIS world. I enjoy good coffee, great architecture and British weather.
View all posts by Luke →
Scan2CAD in Archaeology
Scan2CAD in Theater