Here at Scan2CAD, we know that it can often be difficult to find useful information on the simple issue of which programs perform which functions. That’s why, in recent weeks, we’ve turned our attention towards comparing the many CAD programs currently on the market.

If you’re a regular reader, you’ll have already noticed our comparison of Autodesk software. Meanwhile, we’ve recently compared two of the biggest CAD programs available: AutoCAD vs SolidWorks. This time, however, we’re focusing on two applications from the same company: CATIA vs SolidWorks.

Both of these programs come from the same company: Dassault Systèmes. Additionally, to muddy the waters further, both are 3D CAD programs widely used in fields such as engineering and product design. However, there are some clear differences between these two stablemates. Read on for all the information you need to know on CATIA vs SolidWorks.

CATIA is a somewhat unusual case of a program that predates the company that produces it. The program came into existence in 1977, courtesy of a team of engineers from Avions Marcel Dassault. The team’s remit was to develop a 3D CAD application in order to develop the Dassault Mirage fighter jet. However, the team went much further, creating software with much broader design possibilities, whose usefulness went far beyond designing one aircraft.

They first named their new program CATI. The management of Avions Marcel Dassault took note of the new software, and realized its huge potential. They were also aware, however, that it was infeasible to keep developing the software internally. As a result, in 1981, the company’s software arm was spun off into a new firm: Dassault Systèmes. That same year, CATI was rechristened CATIA, and the company signed a distribution agreement with IBM.

Since then, the team behind CATIA have further developed its aeronautics capabilities, with Boeing having long been one of the software’s major customers. However, the program now includes functionality that allows it to compete in numerous fields, including the automotive and shipbuilding sectors.

From the outset, CATIA has offered designers powerful 3D design tools. However, whilst this remains the case today, its functionality is now much broader. CATIA today is a product lifecycle management suite, combining design, engineering and manufacturing features into one product. As such, it makes it easy for users to manage every aspect of a project in a single program.

A key distinguishing factor of CATIA is that it concerns itself not merely with design, but with product creation. By bundling together CAD, CAM and CAE tools in one suite, it also facilitates the bringing of products to market.

As well as its high degree of complexity, CATIA also sets itself apart by dint of the sheer scale of the projects it supports. The software—which, as noted, began life as a tool to design aircraft—has also been used in the creation of automobiles, ships, and submarines.

Given the highly specialized nature of these products, CATIA has, over time, introduced a number of complex features. These include advanced surfacing and BIW technologies, together with tools to complete product definition. As well as this, CATIA comes complete with a vast array of libraries that make it easy to simulate complex systems such as aircraft flight dynamics, plus the ability to create 3D models from photos.

Meanwhile, another string in CATIA’s bow is the high degree of realism that it offers to designers. The most recent version of CATIA incorporated the STELLAR rendering engine, allowing users to view realistic renderings of their products. Additionally, affordable virtual reality CAD is also possible through the HTC Vive platform. This means that users can gain a greater spatial understanding of the products they create.

As shown in the video above, CATIA has three primary “user communities”: designers, engineers and systems engineers. To meet the needs of these three disciplines, CATIA offers several different tools.

For designers, there’s CATIA Design/Styling, which provides solutions such as 3D sketching, reverse engineering, visualization and subdivision surface. Then, for engineers, there’s CATIA Engineering, which gives users the ability to develop high-quality mechanical products through tools such as digital prototyping, analysis and simulation. Finally, systems engineers have CATIA Systems Engineering, which makes it easy and quick for companies to develop new products and system variants in a collaborative way.

As well as the various disciplines that CATIA serves, there are also multiple products in the CATIA suite. The main CATIA products are CATIA 3DEXPERIENCE, which covers the three aforementioned disciplines, and CATIA V5. The latter program offers a wide range of solutions for professionals working in areas such as mechanical design, product synthesis, analysis, infrastructure, equipment and systems engineering, machining, and more.

Aside from the main two CATIA offerings, there are a number of other CATIA programs on the market. These include:

With a wide range of other tools, including ICEM Surf, SFE Portfolio and Catelectre, it’s clear that the CATIA suite offers a complete range of solutions for the design and engineering sectors.

SolidWorks has been a major presence in the CAD landscape for over two decades. Its first release came in 1995, at which point it was not a Dassault Systèmes program. It came instead from the SolidWorks Corporation, which had been working on the software since 1993. Engineers and designers reacted enthusiastically to the release of SolidWorks, with the program proving immediately successful.

The program quickly attracted the attention of Dassault Systèmes, who paid $310 million in 1997 to acquire the software. Though it had already been a hit, this move helped to further amplify SolidWorks’ potential by providing it with experienced developers—alongside a handy cash injection. For both parties, the deal proved lucrative: SolidWorks went on to attract millions of customers.

Over time, SolidWorks has gone onto become more than just a solid modeling application. The program began to include simulation capabilities starting from its 2001 release—one of the first CAD tools on the market to do so. Continued development has taken place over the years, with SolidWorks 2018—the newest version—bringing new functionalities, including freehand sketching on touch screens, integrated CAM tools, and topology study. Nearing a quarter-century, SolidWorks is still going from strength to strength. 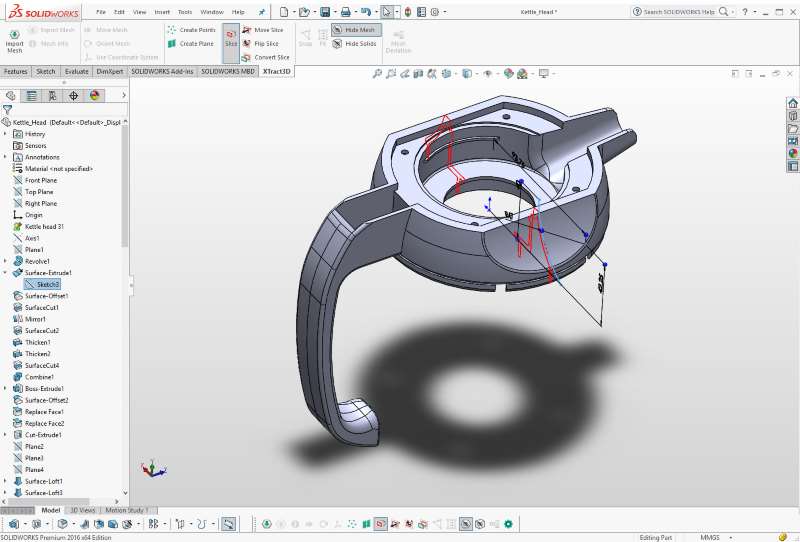 There are some similarities between SolidWorks’ functionality and that of CATIA. Both, for starters, are 3D CAD applications, which allow users to create feature-based models. Meanwhile, both also offer users 2D functionality—though this is more limited in scope than both applications’ 3D features.

Though SolidWorks is perhaps best known as a parametric, feature-based solid modeler, it also incorporates a number of powerful features, making it a much more well rounded piece of software. Amongst these include:

As well as these varied tools, SolidWorks offers a number of different industry-specific solutions. Examples of these include SolidWorks Plastics, which helps to predict and avoid manufacturing defects; SolidWorks MBD (Model Based Definition) for the definition, organization and publishing of 3D product manufacturing information; and CircuitWorks, which allows mechanical and electrical CAD designers to share data.

At the heart of SolidWorks, however, are its CAD capabilities. SolidWorks allows users to design using engineering terms rather than geometric terms. This makes it easier to grasp than programs such as CATIA, and places SolidWorks firmly in the middle of the market: a great option for professionals and hobbyists alike.

The short answer: lots of people! SolidWorks has one of the largest user communities of any CAD program on the market. This means that there’s always plenty of support out there for any newcomers—but, if you’d like a proper introduction, check out our guide to learning the basics of SolidWorks in one hour.

To be more specific, SolidWorks targets some of the same user profiles as CATIA, with designers and engineers across numerous sectors likely to turn to SolidWorks for their 3D CAD needs. However, it lacks some of the functionality that makes CATIA appealing to the architectural community.

Nonetheless, there is some crossover in sectors between CATIA and SolidWorks. Both programs are prominent within the fields of aerospace and automobiles. However, the focus is different, with some engineers summing up the difference thus: “design an engine in SolidWorks, but design an aircraft in CATIA”.

SolidWorks’ wide range of features means, however, that it’s found users across many sectors. Examples of such sectors include industrial and product design, medicine, education and machinery. It’s also popular in the energy industry, including both oil and gas and renewables. New growth sectors for SolidWorks, meanwhile, include fields such as robotics. It’s clear that there’s still scope for this program to grow!

Having covered the ins and outs of the two different programs, it’s time to come to the crux of the matter: comparing CATIA vs SolidWorks.

To help our readers visualize the differences between CATIA and SolidWorks, we’ve put together a useful table below.

It’s clear that SolidWorks is a great option for both professionals and newcomers to CAD—especially thanks to its less dramatic learning curve. For role-based workflows, greater complexity, and higher quality rendering, however, CATIA remains king.

Getting started with either program doesn’t have to be hard. That’s because, with Scan2CAD, you can convert from raster or PDF to DXF—a file type which both programs support.

We hope you’ve found this article useful. Please feel free to leave any more useful CATIA vs SolidWorks differences (or similarities) in the comments!

Which Architecture Software Should I Use?
3D Modelling on iPad Pro from Shapr3D, SimulationX, and More