In recent history, there were a couple of CAD software juggernauts who would dominate the market leaving little choice for the solution you would opt for.  Now, however, there is a much more vibrant and growing list of CAD solutions, each of which is beginning to specialize in specific use-cases.

With the different options available today, which computer-aided design software is the best tool to turn your ideas to reality? In this article, we will compare two popular BIM programs: Revit and Vectorworks. In the first part of this post, we will explore their history, functions, and uses.

In the second part, we will compare the different features, prices, operating system requirements and support options to help you understand whether Revit or Vectorworks is the best solution for you.

Vectorworks’ first incarnation was named MiniCAD. MiniCAD was released by Diehl Graphsoft (not to be confused with Graphisoft, makers of ArchiCAD) in the mid 1980s. It was the first CAD software available on macOS and became the best selling hit for designers and engineers.

Other the years, MiniCAD evolved into Vectorworks (now owned by the Nemetschek Group) which became a powerhouse in both Computer Aided Design (CAD) software and Building Information Modeling (BIM) technology. As the leading program in its class, Vectorworks was one of the first CAD software to explore and introduce BIM capabilities, even before the word “BIM” was mainstream. 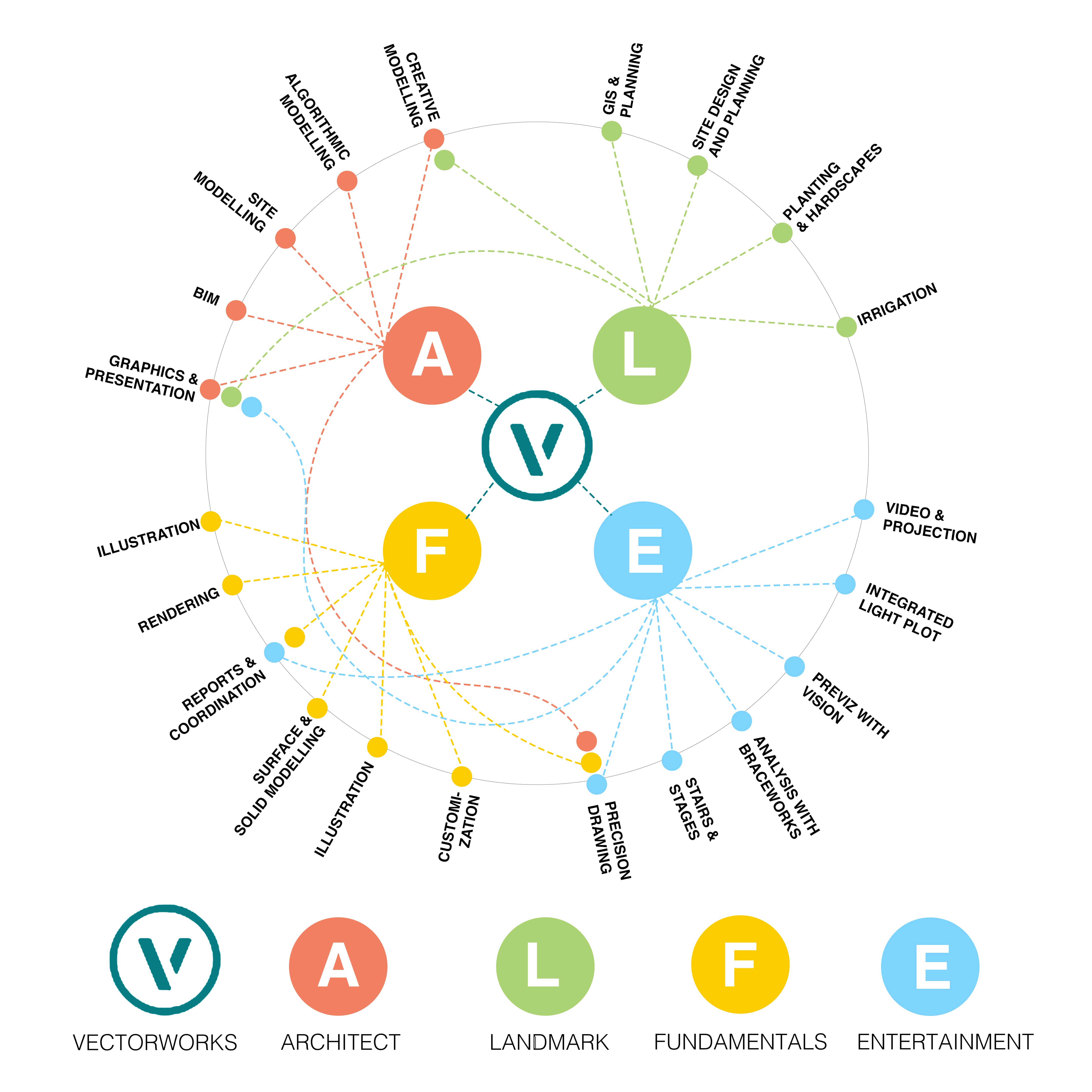 The infographic shows Vectorworks’ main features subcategorized into 4 namely Architect, Landmark, Fundamentals and Entertainment. Each feature is further subdivided into its capabilities.

Vectorworks breaks down their product offering by the core use-cases of their customers. The Vectorworks product you would use would depend on your industry.  For example, Vectorworks Spotlight is a solution for the design and production of large scale entertainment performances. Vectorworks Landmark is intended for architectural landscape design and GIS planning. And Vectorworks Fundamentals offers users the ability to sketch products, build models and create an analysis of them.

If you are comparing Vectorworks to Revit, the most relevant comparable product would be Vectorworks Architect.

Vectorworks Architect is geared towards 2D drafting and 3D modeling and, much like Revit, it offers full BIM capabilities.

Vectorworks Architect is certainly one of the leading BIM solutions in the market and it is the flagship product offered by Vectorworks. Vectorworks Architect offers an impressive range of features to facilitate every part of the architectural design process from drafting and 3D modeling to BIM and graphic renderings.

In October of 1997, Leonid Raiz and Irwin Jungreis founded Charles River Software with the goal of bringing the power of parametric modeling to the building industry. The company grew bigger with the help of prominent venture capitalists and in 1999 they hired Dave Lemont as CEO and recruit board members Jon Hirschtick, founder of SolidWorks, and Arol Wolford, founder of CMD Group.

In 2000, the company was renamed Revit Technology Corporation and released Revit 1. Five more versions were soon released after. In 2002, Autodesk purchased Revit Technology Corporation for US$133 million. The venture allowed more research, development, and improvement of the software. Several versions were released since 2004. The most notable is the 2006 release of Revit Building which was later renamed Revit Architecture. 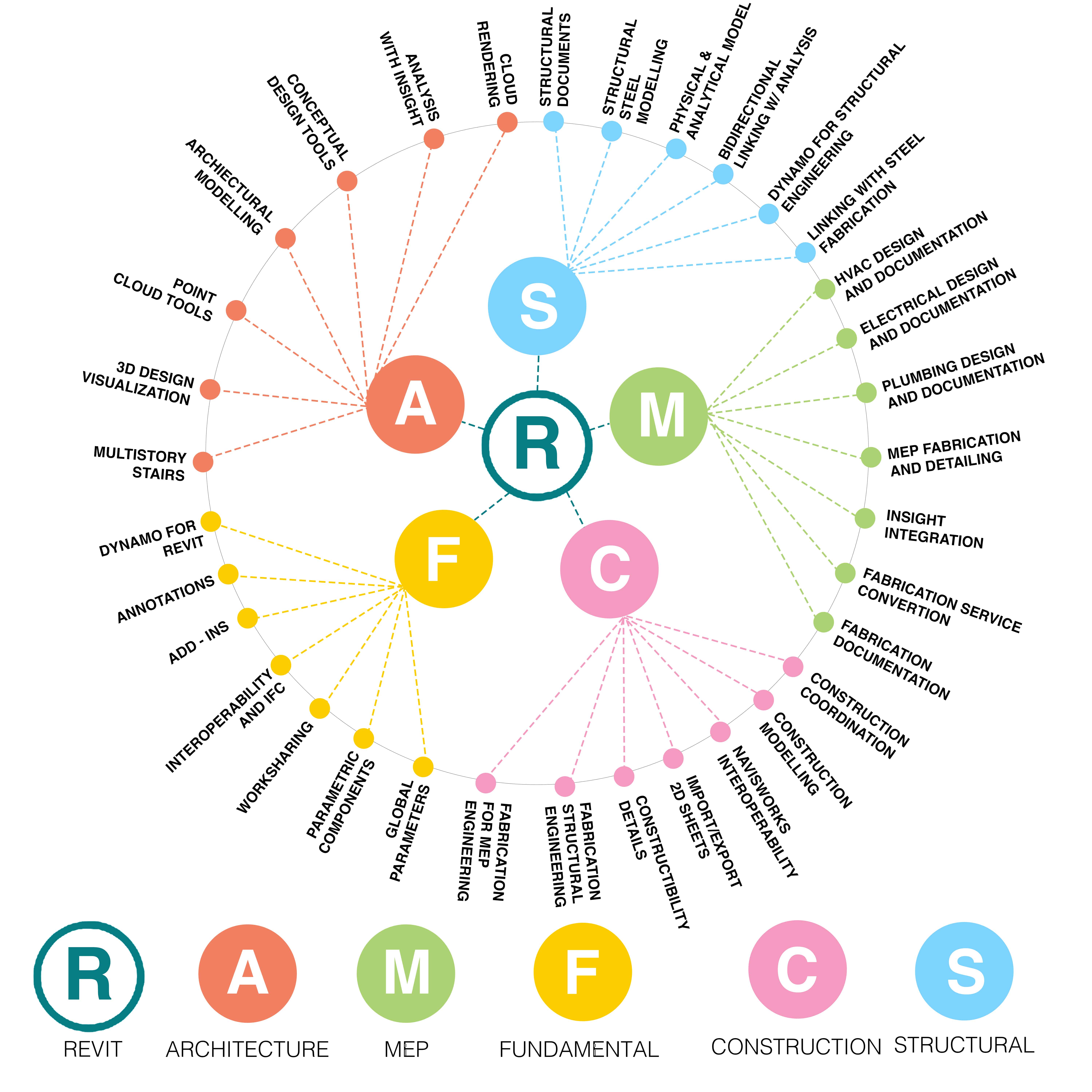 The infographic illustrates Revit’s main features broken down into 5 categories namely Architecture, Structural, MEP, Fundamentals, and Construction. Each feature is further subdivided into its key capabilities.

Unlike Vectorworks, Revit is not divided into multiple product offerings. However, Autodesk categorized the features of Revit by the industries that use the software. This division of features is visualized in the above infographic.

Much like Vectorworks, Revit offers a range of features for each aspect of the design process. From parametric modeling and architectural modeling to schedules and material take offs.

AutoDesk has made team collaboration an essential feature of this software. Contributors from multiple disciplines can share one centralized file with task delegation, communication, team scheduling and more.

Of course, by choosing Revit as your BIM solution you might also have access to other useful AutoDesk products such as BIM 360, a centralized solution for design collaboration, construction coordination and communication.

As you would expect, Revit is utilized by the leading global AEC companies such as Atkins, Stantec, HDR Inc, Skanska and many more.

Due to Revit’s focus on enabling the full construction process, from design to production, Revit is tightly integrated into not just the CAD operator’s day-to-day activities but also potentially site coordinators, project managers, and other such team members.

In this second part, we highlighted important considerations to help you decide which software is best for your needs.

So which aspects of the BIM software are most important to you? If team collaboration across the full project is important to your workflow Revit has an advantage over Vectorworks.  Revit offers flexibility for professionals in different fields to communicate until construction is complete.

Vectorworks is very flexible in terms of the variety of supported devices (Mac and Windows are both compatible). Vectorworks learning curve is subjectively much less steep than Revit and the software is also comparatively cheaper than Revit. The lower per-user price would be especially advantageous if you were required multiple user licenses.

Both Revit and Vectorworks have a wealth of add-ons or plugins available which can be used to expand the functionality of the software to meet more specific needs.  The differences in the support and training offered between the two solutions are negligible.

As always we would recommend getting hands-on experience with both solutions to test which is best for your specific needs. Download the Vectorworks free trial and the Revit free trial (both free for 30 days) and test the software with a project similar to your usual work.

If you’re considering other CAD software options, you might benefit from our other popular comparisons: Solidworks vs Fusion 360, AutoCAD vs Solidworks and AutoCAD vs Draftsight.