Computer-aided design plays a vital role in the world of design. It is used extensively in different fields such as Engineering, Aerospace, Automotive, Industrial design, and many others. Due to its wide range of applications in many industries, a plethora of CAD software have been developed with impressive capabilities. With this, the issue of selecting the perfect software for your design arises. To help solve this problem, we at scan2CAD offer annotated comparisons between different CAD software.

In this article, we are going to provide you with a comprehensive explanation of ArchiCAD vs. Revit, two BIM software packages. A concise history of the programs would first be given, then their different features and users. Finally, we will be giving a comparative analysis of the applications based on their features, users, operating system compatibilities, licensing options, and so on.

The evolution of the software ArchiCAD began in 1982 when it was created for Apple Macintosh. It was then launched in 1987 by a Hungarian software company, Graphisoft using Graphisoft’s virtual building concept. ArchiCAD is the first execution of BIM (Building Information Modeling) and also the one of the first CAD software capable of creating two and three-dimensional geometry on a personal computer. ArchiCAD’s capacity to store huge amounts of data within a 3D model was considered revolutionary. Since its launch, there have been various releases of ArchiCAD versions almost every year with different modifications. ArchiCAD 23, the latest version, was released in 2019. ArchiCAD has grown into a more refined software allowing users to be more intuitive with their designs.

What does ArchiCAD do? 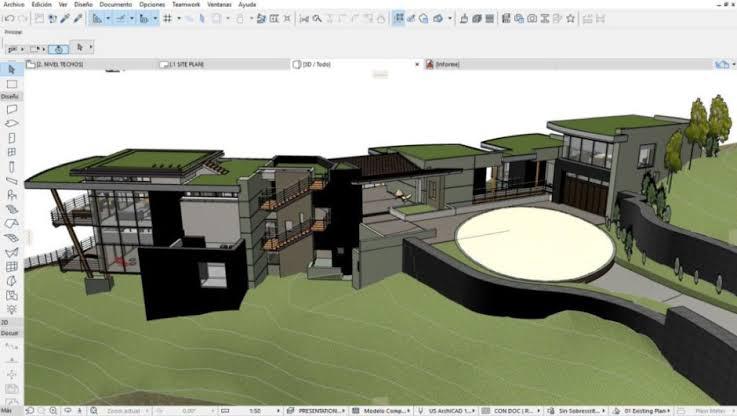 ArchiCAD is an industry-acclaimed architectural BIM software used by Architects, Drafters, and Interior designers for architectural 2D and 3D designs. It helps users to create virtual buildings using structural parts like windows, slabs, rods, doors, walls, and others. You can virtually create models of exactly how you want the building and its surroundings to look. The software is compatible with Microsoft Windows, Mac OSX, and mobile devices (android and iOS) and is available in 27 different languages.

ArchiCAD has various features which are divided into design, visualization and rendering, collaboration, and data management.

ArchiCAD has different tools that facilitate users to create models faster and with more detail. You can work with a 2D or 3D representation on your screen. Although the database stores your data in three-dimension, you can easily generate your plans, elevations, and sections from the virtual building. The program also allows the importation and exportation of the DXF, DWG, and IFC and BCF file formats. It also allows you to upload your 3D models and their 2D drawings to BIMx, enabling you to view them at any time on your mobile or computer devices.

This ArchiCAD feature has helped users transform their models into high-quality photo-realistic pictures and videos. With this feature, design decisions and client presentations are made easy as they are allowed to see how the model and its environment would appear in real life.

This capability enables several team members to work on a building model simultaneously. This is made possible by the BIM cloud as edits made on the model by the members are synchronized with the cloud, helping them see the changes in real-time and design simultaneously over the team leader’s network. The collaboration feature helps your team work on models from anywhere in the world.

ArchiCAD comes with various capabilities that ease the design process and make teamwork possible. It covers the aesthetics and technical design of a building. It is widely used by Architects, Drafters Engineers, and Designers (landscape or interior). Some companies that use ArchiCAD are RIBA Enterprise, Retail Food Group Limited, Treeline, Root Incorporated, USA, and many others.

The journey of Revit started on October 31,1997 when Charles Rivers Software was founded by Irwin Jungreis and Leonid Raiz who were, at that time, developers of PTC’s Pro/Engineer software for Mechanical Design. The software was renamed Revit in January 2000 and thereafter Revit 1 was released. In 2002, Autodesk, makers of AutoCAD, bought Revit Technology Corporation for 133 million US dollars. This purchase led to intensive research, development, and improvement of the program. At that time, Revit was released as different versions based on disciplines. There were Revit Structure, Revit MEP (Mechanical, Electrical, and Plumbing), and Revit Building which was later renamed Revit Architecture. Later on, all these versions for different disciplines were brought together into one package simply called Revit. Several improvements have been made on the software since then. Revit 2021 is the latest version.

What does Revit do?

Revit is a BIM software package that has complex design and collaboration tools suitable for Structural design, Architectural design, Landscape design, and MEP Engineering. The software covers the complete construction process, which is from the structural design to plumbing to electrical design. Revit is compatible with only Microsoft 64-bits Windows operating system and is available in English, German, French, Spanish, Chinese, Japanese and some other languages.

There are several capabilities offered by Revit that produce well-detailed designs efficiently. These capabilities are divided into design, collaboration and data management, and visualization and rendering.

Revit has made the design process so easy and efficient with its design capabilities. The software comes with a user-friendly interface and you can easily make use of the tools to produce 2D drawings and their respective 3D models. There are also existing relationships between the views and the families. For example, when you edit an elevation of your model, the plan changes immediately, helping you avoid confusion and mistakes. This feature allows the importation and exportation of DWG, DGN, IFC, and other widely used file formats.

The collaboration and data management tools provided by Revit enable multiple workers to work on a single project easily. This is done by using the BIM 360 design, a highly secure cloud-based collaboration and data management solution where design and construction teams can co-design models. With this feature, designs are done more efficiently as corrections can be made by team members, and feedback is gotten immediately from the client or company. Members can work on a design simultaneously from anywhere at any time. Collaboration can also be done through sharing, where users can work on a model simultaneously via a local area network.

Revit offers high tools for high-level visualization and rendering. Design Presentation is a very important phase of the design process. With these tools, communicating designs with either the client, team members, or companies have been made easy as you can give a more realistic ending presentation.

ArchiCAD and Revit are two highly-rated BIM software applications that have sophisticated capabilities that make the design process efficient. Choosing which software now depends on the job at hand. ArchiCAD is the one for you if your design is fully architectural based and you plan on working as a team. However, if your application is more sophisticated, Revit is the right choice.