Graphisoft is one of the design and engineering industry’s biggest names when it comes to Building Information Modeling software. Over the years, it has become a household name for engineers, urban planners, architects, and interior designers. Its most well-known product – ArchiCAD – is how the company competes with other big BIM brands.

The program is popular for its ease of use and comprehensive functionality and this, along with the company’s other products, has cemented Graphisoft’s place in the design community. Most customers are immensely satisfied with their products and are proactive when it comes to giving feedback and helping the software grow. Most users who switch to ArchiCAD from other design software rarely choose to use other programs afterward.

But behind the company’s seemingly natural success is a history of passion and persistence. Scan2CAD is here to share with you the Graphisoft’s story as well as all you might ever want to know about the company.

Gábor Bojár founded Graphisoft in 1980s communist Hungary. He had grown up in an environment that fostered an unsustainable work ethic and that was a major factor in his conception of the company. Bojár remembers how his own development was discouraged and stifled after proving himself capable. His superiors at the time did not tolerate anything that would threaten the security of their own jobs, so the system at the time thrived in mediocrity. In direct opposition to that line of thinking, Bojár felt the need for a kind of company that would instead aim to find the best and most skilled people available. Bojár’s goal was to start a company where he would select and hire those that are better than him. 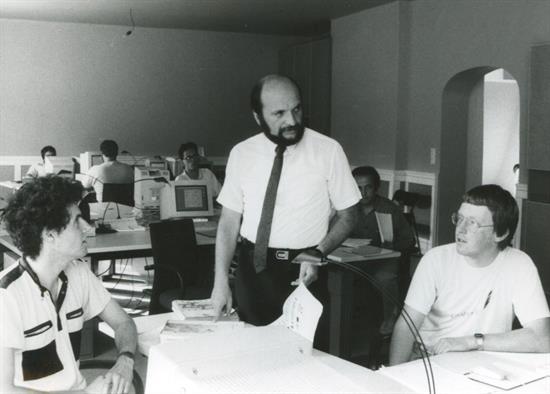 When it was eventually made legal to put up private firms, he immediately quit his job and set out to establish Graphisoft. He served as found and president-CEO at the time and had worked closely with his student colleague, Ulrich Zimmer. When the company was launched in 1982, as Bojár and Zimmer were developing what would eventually become ArchiCAD, Graphisoft was tasked with assisting Hungary’s ministry of power in the installation of a new nuclear power plant. The ministry had encountered major issues in the process and Graphisoft, using the geophysics institute computers after work hours, was able to solve the problems. The company was given a sizable enough payout and helped them get through their first years of trying to get themselves off the ground.

In the next few years, Graphisoft set out to trying to rewrite their code for Apple’s Lisa, smuggling in Macintosh’s into Hungary with some help from Bojár’s acquaintance, Steve Jobs, and finally coming out with the official version of ArchiCAD in 1987. This support from Apple was indispensable for their early growth. The moral support from them was one thing, but it was the access to Apple’s reseller network that was absolutely critical when the company was just starting out.

It was in the 1990s when Graphisoft started to establish a solid global presence. Bojár’s team had found themselves using the simplest of computers in the company’s early years. And so despite their expertise in 3D modeling, they had to work around the fact that they could only use inexpensive machines. ArchiCAD was developed with that in mind, so Graphisoft found itself a global market niche in architects who could not afford the most state-of-the-art computers.

The Hungarian government was also integral in the company’s growth. Due to the political climate at the time, there was not much opportunity for young talent to grow. Graphisoft found itself attracting the best of the best in the country, and with its commitment to putting importance in its people, the skill of the company’s staff made it easy for them to find loyal clients and customers.

Globalization and technological advances soon made some of Graphisoft’s competitive advantages less potent, so to continue to keep themselves at the top of their game, the company invested in a campus in North Budapest – Graphisoft Park. It was designed and still serves as the company’s main headquarters, but also as a local home for big brands such as Microsoft, Canon, and Silicon Labs. 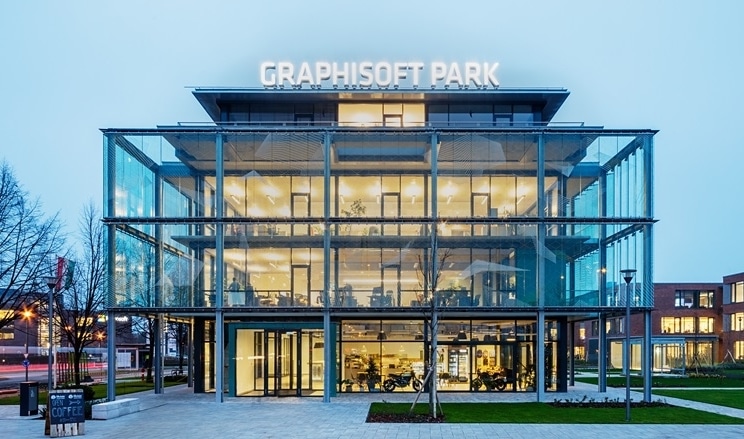 2007 was a big year for Graphisoft as it was the year it had officially been acquired by the Nemetschek Group, an international vendor of software for design professionals and engineers. With the acquisition came some title changes, with Bojár then becoming the Chairman of the Board and the mantle of CEO being passed on to Viktor Várkonyi. Bojár still remains in the Graphisoft Park being an active component in the development of AIT, the Aquincum Institute of Technology – an educational institute he had founded. AIT was also founded the same year as the acquisition, and Bojár envisions it as a school that specializes in the two industries that built Graphisoft – entrepreneurship and information technology.

Graphisoft has focused and developed its flagship product for the past quarter of a century, making sure that ArchiCAD is a top-of-the-line software for architects, designers, and engineers. But that’s not to say that it’s the only product in Graphisoft’s arsenal. The company mainly focuses on various versions and iterations of its main BIM program, but to really get an idea of what these other products are, let’s list down its main products below. 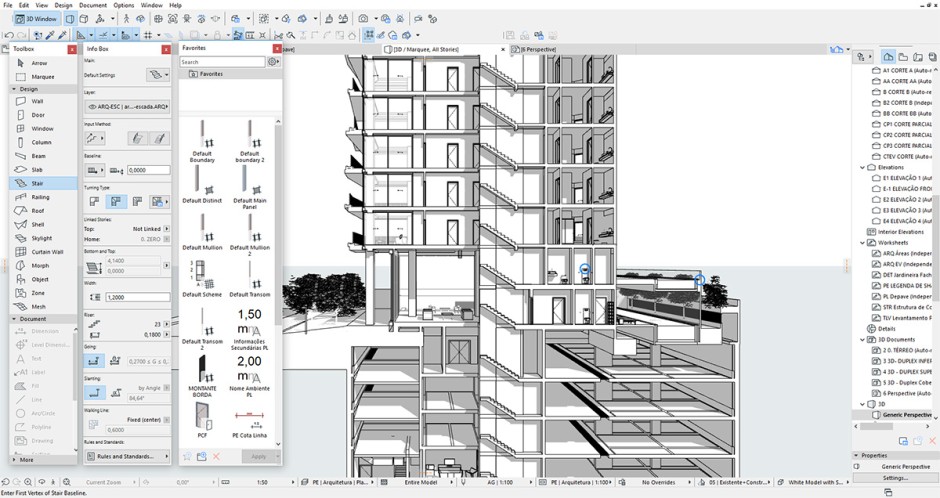 Let’s start off with Graphisoft’s flagship product – ArchiCAD. It is a software for BIM and CAD made for both Windows and Mac operating systems. Originally, it was developed for architects, but other than architectural design and drawing, Graphisoft is also widely used by engineers, interior designers, engineers, and other technical and design professionals.

The program was first developed back in 1982 when Graphisoft was collaborating with Steve Jobs and Apple. At the time, they were developing the program for Apple’s Lisa exclusively. After a few years, Graphisoft then launched ArchiCAD in 1987 with their Virtual Building concept. It was one of the first programs to employ BIM technology. Additionally, it was the first program of its kind to integrate 2-D and 3-D geometry and to store an unprecedented amount of data in its models.

Formerly known as BIM Server, BIMCloud is a utility that allows architects and design professionals to collaborate on a BIM workflow seamlessly and intuitively. It is a cloud-based collaboration solution that enables secure, 24/7 teamwork between professionals regardless of office locations, scope and size of the design work, or the type of internet connection. Because of its real-time collaboration features, users can take advantage of the service from anywhere and with minimal program maintenance.

The MEP (Mechanical/Electrical/Plumbing) Modeler for ArchiCAD is an extension that helps to create 3-D representations and models of the various building systems that go into designing a space. These include piping systems, plumbing systems, electrical wirings, and ductwork for ventilation. This helps keep the model as accurate and as informational as possible. As ArchiCAD is a program that is mainly used by architects and design professionals, most of the program focuses on architectural features such as floor slabs, walls, columns, ceilings, and roofs. When more detailed plans and drawings are required, that is when the MEP Modeler comes in.

Graphisoft’s EcoDesigner is another extension for ArchiCAD that helps architects do accurate energy readings and evaluations.  With the rise of sustainable and green design in the architecture community, this add-on is a must-have. EcoDesigner can give accurate measurements of a designed building’s Carbon footprint, average estimated energy consumption, and regular energy balance.

BIMx is a set of desktop and mobile tools that can help designers present their models and drawings to clients and collaborators in an interactive way. The interface of the program is designed to be simple, intuitive, and highly presentable. Users can view 3-D models and their corresponding 2-D drawings and sheets through viewing applications on Android, Mac OS, iOS, and MS Windows operating systems. You can conduct walk-throughs of your building models similar to the views in video games.

On the CAD Industry

When it comes to products and Graphisoft’s impact on the CAD industry, the company chooses to focus not on quantity and the range of software, but on the quality of its established programs and the depth of what to do with them. From the start, they’re a company that has delivered quality BIM software and solutions. They were arguably the first company to put to market the concept of BIM draft work, with their Virtual Building back in the 1980s. More recently, they are the first to establish a real-time collaboration environment for their BIM products, an innovation set about by the more prevalent weight of globalization in today’s architecture and design industry. With their ArchiCAD extension, EcoDesigner, they’ve also managed to become the first to come up with a fully BIM-integrated solution to modern Green Design (see the below video). These and many more have cemented Graphisoft as one of the most influential trail-blazers in the CAD industry.

Graphisoft Park is the home of Aquincum Institute of Technology (AIT-Budapest), an educational institute founded by Gabor Bojár back in 2007. Bojár had used the majority of the profit gained from the Nemetschek acquisition of Graphisoft to found AIT in an effort to “Invest in People”. The school focuses not only on the technical, informational side of computer science, but also takes into consideration the need for marketable and sellable products by offering courses on entrepreneurship. AIT offers courses to students from even the Ivy League schools of the USA, with regular collaborations and work-abroad programs.

Aside from AIT, Graphisoft itself offers various online seminars, ArchiCAD books, training materials, and an in-depth curriculum of BIM and ArchiCAD tutorials, all available on their website.

On Careers and Architecture

From the onset, the advent of BIM technology brought about by Graphisoft has changed the way architects conceptualize and complete their design workflows. For 25 years, ArchiCAD and Graphisoft have been champions of innovation for design conceptualization. Top architects and architectural firms from all around the world utilize the company’s programs for the projects. Many of them particularly praise the collaborative nature of Graphisoft’s BIM programs, noting how working on the same model even from different countries has become as easy as ever before. They also particularly like ArchiCAD’s intuitive user interface and it’s flexible functionality.

ArchiCAD and Graphisoft keep tabs on interesting BIM case studies on their website. The different case studies showcase how BIM software was used to create interesting roof structures and building forms as well, all of which could not have been created if not for Graphisoft’s contribution to the design industry.

The Future: What’s Next?

Graphisoft’s formula of investing and developing its BIM software has served it well in the last 25 years. They have perfected, innovated, and developed the concept of the Virtual Building continuously and passionately. In all likelihood, the future will have Graphisoft developing the software, even more, to cater to the ever changing and ever expanding nature of design work in the modern era. We will most likely be seeing more intuitive versions of ArchiCAD as well as more extensions and add-ons.

But with the fast-paced nature of today’s computer science and informational technology, no one can really be sure. In any case, with Graphisoft’s track record of putting talent, innovation, and development first, one thing is certain – we can’t wait for what Graphisoft has in store for us next.