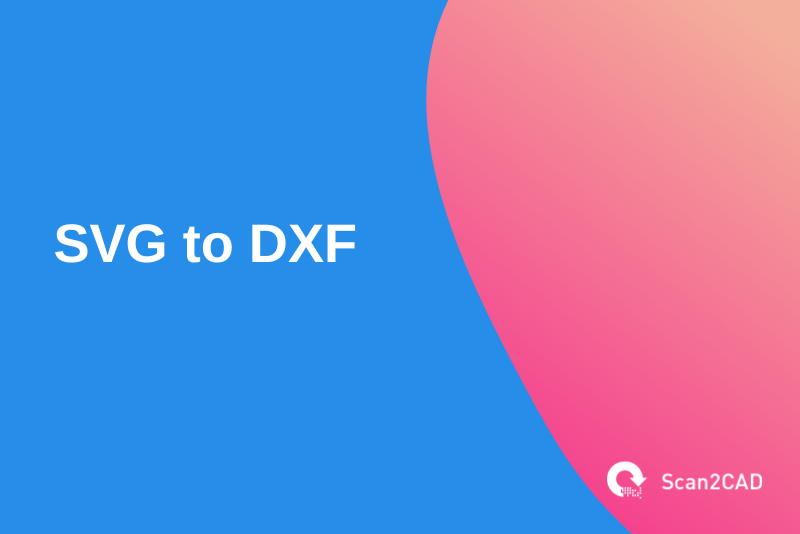 Web-friendliness of file formats – in terms of the file size – is a key consideration for web developers, particularly because loading large file sizes usurps a lot of resources. Furthermore, when the file format is not impacted by magnification or zooming in/out, then that is an added advantage. In SVG, web developers and other users, such as engineers, designers, and architects, find a file format that embodies these two characteristics, and much more. But as part of their day-to-day activities, these users may want to convert SVG to DXF.

The reasons for wanting to complete the conversion vary. For instance, the users may want to edit the contents of the files, which could include 2D drawings or 3D models, using CAD software. Alternatively, some of the users in a team may not have access to software that can open SVG files but possess programs that can open DXF files. Logically, converting the SVG drawing to DXF would be the best option. Regardless of the motivation behind wanting to undertake the conversion, how would you or these users go about it? This article will detail everything you need to know about completing an SVG to DXF file conversion.

SVG, which stands for Scalable Vector Graphics, is a digital vector file format. The SVG format is nothing like raster file formats, which, being pixel-based, are impacted by magnification/zooming. The quality of raster images diminishes with an increase in the magnification.

This is a sharp contrast to vector file formats, like SVG, which store drawings, illustrations, and images through mathematical formulas. Thus, every time you zoom in or out, new parameters or variables are automatically inputted into the mathematical formulas, with the new results completely redefining the visual layout of the image, including lines, circles, and more. This non-pixel-based characteristic makes SVG files and other vector file formats, such as DWG, DXF, PDF, and AI, better at retaining the original quality of images and drawings.

The World Wide Web Consortium’s (W3C) SVG Working Group (SVG WG) developed the SVG file format in the late 1990s as a direct response to the need for a web-friendly vector file format. It is a family of XML-based formats whose development and design were influenced by Adobe’s Precision Graphics Markup Language (PGML), HTML, CSS, and XML.

SVG enables the incorporation of three types of graphics objects into an image in order for it to be seamlessly displayed on the web. This incorporation displays the three graphics objects, namely text with visual effects, raster graphics, and vector graphic shapes, on the web as a free-standing visual element or image file on a web page. In addition, SVG includes markups/metadata that define functional features that support the management and construction of the displayed picture.

As a preferred web-friendly file format, SVG has the following characteristics:

SVG is used to store the following:

Developed by Autodesk, the DXF (Drawing Exchange Format) file was launched in 1982. It is a vector file format used by architects, designers, and engineers to store 2D drawings and 3D models. As its full name suggests, the DXF file format is primarily used to share drawings and designs across various CAD programs, thus promoting collaboration.

There are two types of DXF files:

The ASCII DXF file, which is more common than the binary DXF file, is made up of group codes that indicate the type of value. The group codes define the various sections of a DXF file that, combined, form the overall structure of the file. These sections include the header, classes, blocks, tables, entities, objects, and thumbnail images.

On the other hand, the less common binary DXF contains all the information stored in the ASCII DXF file, but with a few differences. Firstly, the binary DXF files are smaller; they take up about 25% less space than ASCII DXF files. Secondly, they are read and written five times faster by AutoCAD. Thirdly, they maintain the floating-point accuracy of the drawing; this is in sharp contrast to ASCII DXF files which compromise on the accuracy to reduce the file size.

With this background information, it’s time to explore how you can convert SVG files to DXF.

How to Convert SVG to DXF

By default, SVG files are meant to be opened using web browsers. All major browsers – Firefox, Safari, Edge, and Chrome – allow you to open images stored using this file format. All you have to do is double-click the file, and the image will be opened on your default browser. That said, browsers are simply meant to help you view the image. You cannot edit the SVG file using these applications. For this, you can use Adobe programs such as Illustrator, Photoshop, and InDesign, as well as non-Adobe applications such as CorelDraw, PaintShop Pro, Microsoft Visio, GIMP, Inkscape, and Vectornator, just to mention a few.

Of the various programs that you can use to edit SVG files, Inkscape, Vectornator, and GIMP are the only free ones. Free programs are ideal for converting files. This is because file conversions are mostly a one-time exercise, or you will probably undertake them only occasionally. However, when it comes to exporting SVG files as DXF, Vectornator and GIMP do not support the latter. This leaves us with one proven option: Inkscape. (You can also use CorelDraw, but you have to pay to use it.)

How to Convert SVG to DXF with Inkscape

Inkscape is a cross-platform design software program that allows users to create vector graphics as well as edit raster images and save them as vector formats. Notably, with Inkscape, you cannot save files using raster file formats; you can only import them. The software is used to create logos, illustrations, and art. It is used in numerous industries, including engineering/CAD, web graphics, branding and marketing, and more. It is also a hit among hobbyists and individual users, thanks partly to the fact that it is free.

Inkscape is a particularly ideal software that enables you to vectorize raster images. But even more intriguingly, the software allows you to convert from one vector file to another. It is thanks to this capability that you can convert SVG images and drawings to DXF with Inkscape.

Here is a step-by-step guide on how to convert SVG to DXF using Inkscape:

Inkscape supports two different versions of DXF: AutoCAD DXF R12 and AutoCAD DXF R14. The former is a newer, more improved version of the file format. It is also important to note that this procedure is relatively straightforward because both the SVG and DXF files are vector file formats. As such, you do not have to use Inkscape’s Trace Bitmap feature, which applies to raster images.

However, it is worth pointing out that Inkscape cannot seamlessly convert the circles that form part of the original SVG files to perfect circles. This means if you open a converted DXF drawing that has circles, you will notice that the circles are a collection of short arcs that only cover minute sections of the circumference. This problem is perhaps because you have to resize the originating image to fit inside Inkscape’s workspace, a factor that distorts the perfect circles. Thus, you could avoid this problem by resizing the originating image uniformly.

How to Convert SVG to DXF in Bulk

Inkscape allows you to convert only one file at a time. But that is not to say that no solution supports batch conversion.

ReaConverter enables you to convert SVG to DXF in bulk. It is an online and offline conversion software developed by Germany-based ReaSoft. According to our analysis, ReaConverter performs better conversions than Inkscape. However, compared to the freeware, ReaConverter is a paid software available across two pricing tiers: Standard edition ($49.99) and Pro edition ($99.00)

What Online SVG to DXF File Converters Can You Use?

ReaConverter is a versatile and reliable online SVG to DXF file converter. However, as we have detailed in our previous articles on how to convert DWF to DWG, DGN to DWG, and SVG to DWG, this online file converter has a few drawbacks. Chief among the drawbacks is the lack of transparency on what the developer does with the files.

While other online file converters promise to delete the uploaded files immediately after the conversion, with the converted files being deleted a few hours post-conversion, ReaSoft does not make this promise. Thus, if you are dealing with sensitive files, it would be best to avoid the online version of the software. Instead, use the desktop software.

If you want to convert your drawing, which is saved as an SVG file, to DXF, there are a few viable options. Firstly, if you have access to paid software such as CorelDraw, you can use it. However, if you are not looking to spend a considerable amount of money for a one-time conversion or infrequent conversions, you can either download and use Inkscape for free or use ReaConverter, a free online file converter that supports batch conversions. But given that this online file converter does not clearly outline its privacy policy, it would be best to use the desktop version of the software. But unlike Inkscape, which is free, ReaConverter requires you to make a one-time purchase.

As a registered civil engineer with a strong penchant for technology and new tech trends, it is my pleasure and joy to share my tech and CAD/CAM software knowledge and experience.
View all posts by Kevin →
How to Convert DWF to DWG
How to Convert to DWG – The Ultimate Guide